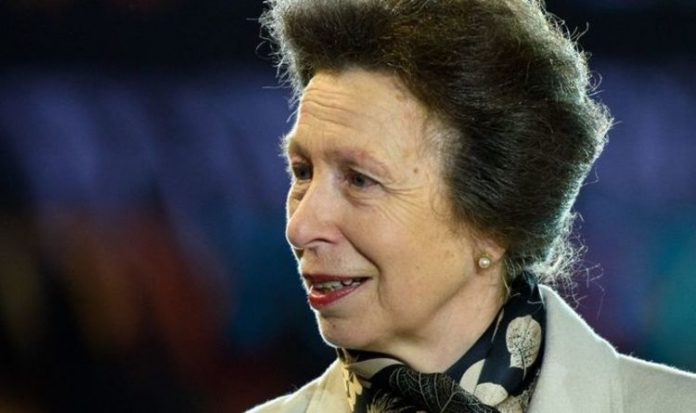 Princess Anne, who is known fondly as the hardest-working royal, became president of Save the Children 50 years ago. This milestone has a been publicly marked by the charity, which shared on Twitter a message and a video celebrating the relentless support the Princess Royal has given this organisation.

They wrote on the social media platform: “A lot has changed in the last 50 years – and Her Royal Highness Princess Anne has been with us to see it all.

“To celebrate The Princess Royal’s 50th anniversary as our Patron & President, we would like to say thank you for everything she has done for children.”

In the video, Princess Anne is seen during various overseas visits speaking to staff of the charity and children supported by it.

Royal fans joined in the celebrations, sharing their thoughts and experiences with the Princess Royal.

Princess Anne said it took her a decade of background work before feeling confident enough to contribute to the charity’s public debates (Image: GETTY)

One Twitter user, called Morgans&Marathons, wrote: “She is such a treasure!!! Absolutely adore her!”

Joanna continued: “Really admire the hard work she has done for so long – didn’t realise it’s been 50 years. Amazing.”

And a third Twitter user, Emma Carroll, added: “Such an AMAZING inspiring woman as are all the amazing people she has helped over the years”.

Princess Anne’s work with Save the Children officially began on her 20th birthday, on August 15 1970.

Princess Anne has travelled the world to support Save the Children (Image: GETTY)

Over the past five decades, the Princess Royal has been hands-on with her support to the charity, travelling to poverty and war-stricken areas as well as casting the light on the organisation’s projects.

Her first trip was to the Save the Children’s centre in Nairobi.

In 1982, the Queen’s only daughter undertook a tour to Swaziland, Zimbabwe, Malawi, Kenya, Somalia, Djibouti, North Yemen and Beirut – and refused to call off her visit to the latter nation even though 62 people were killed by a bomb the day before her arrival.

Princess Anne taking part in the Save with Stories initiative (Image: SAVE THE CHILDREN/INSTAGRAM)

Princess Anne visiting a Save the Children centre in Gambia (Image: GETTY)

Her work for poor children and their mothers around the world earned her a Nobel Prize Nomination in 1990.

The then president of Zambia, Kenneth Kaunda, said upon nominating her: “She loves people.

“She has extended that love to working for helpless children in many parts of the world. That is love in action.”

Princess Anne also became the patron of the charity in 2016, after the Queen passed on to her this role.

Princess Anne is the Queen and Prince Philip’s only daughter (Image: EXPRESS)

In a rare interview marking her 70th birthday, the princess spoke about her work and commitment to the charity.

Telling Vanity Fair she was deeply proud of her work done with Save the Children, the no-nonsense royal added her legacy was not what mattered but “whether the organisation as a whole has made the sort of difference that it really wants to…”

She added: “So, you know, you look at the Save the Children’s adverts and you think, ‘Has nothing improved?’

“When actually, yes it has, but that doesn’t get you any more funding.”

The princess also revealed it took her years of work behind the scenes before finding the confidence to take part in public debates for the charity on the world stage.

Princess Anne has been a patron of Save the Children for 50 years (Image: SAVE THE CHILDREN UK)

She said: “It took me probably 10 years before I really felt confident enough to contribute to Save the Children’s public debates, because you needed to understand how it works on the ground and that needed a very wide coverage.

“So my early trips were really important.”

Anne’s public support to Save the Children continued during the pandemic.

During the first national lockdown, the Princess Royal took part in the final instalment of the initiative Save with Stories, which aimed at providing children most-hit by the pandemic with necessities, and read Thomas and the Royal Engine from her home as part of the Save The Stories.