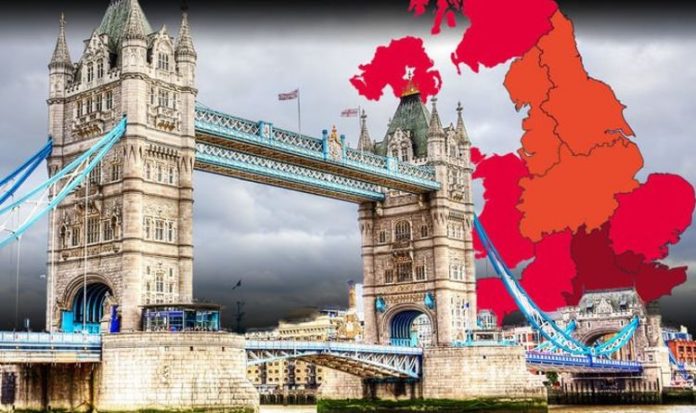 With just eight days to go until the Government reviews the tier allocations in England, London Mayor Sadiq Khan is urging people to stick to the coronavirus restrictions in London to prevent tougher rules being implemented. The capital emerged from the second national lockdown in Tier 2 earlier this month but many fear London could be upgraded to Tier 3 when the restrictions are reviewed next week.

What is the R-rate in London?

Following the end of the second national lockdown in England, several authorities in the UK are recording lower levels of coronavirus transmission.

According to the Government website’s latest update on Friday, December 4, the R-rate in the UK as a whole ranges from 0.8 to 1.0.

Some regions which were once reporting some of the highest coronavirus infection rates in the UK are now seeing their growth rate shrink per day.

READ MORE: Doctor to become one of first people in the world to receive COVID jab

The North West and the North East and Yorkshire are both reporting an R-rate between 0.7 and 0.9, with a growth rate of -5 to -3 percent per day.

Although there has been a drop in cases in some areas, in places such as the South East and London the R-rate remains at 1.0 or above.

The latest estimates report the R-rate is between 0.9 to 1.1 in London.

A spokesman for the London Mayor said there could be a “devastating” surge of Covid infections this winter if people fail to follow the Tier 2 rules.

The spokesman said: “If we begin to act like this virus has gone away we could see a devastating further surge in cases at a time of year when our NHS is already under enough pressure.

“The number-one way to look out for our loved ones and support local businesses in this festive season is to follow the rules and do all we can to avoid going back into tougher restrictions, later this month or any time in the future.”

The tier allocations in England are due to be reviewed for the first time since the national lockdown ended on December 16, where London could potentially be placed into Tier 3.

Professor Paul Hunter, from the University of East Anglia in Norwich, told the Telegraph: “There were more cases at the end of lockdown than at the start in London.”

He added: “If cases in London were rising even during a national lockdown then we do need to reconsider the tier allocation in these areas. Whether across the region or at the local authority level is open to debate.”

A Department of Health and Social Care spokesperson said: “Tiering decisions are based on a range of criteria including how quickly case rates are going up or down, cases in the over 60s, pressure on the NHS and local circumstances.

“The Government will review the tiering allocations every 14 days and areas will move up or down the tiers based on these indicators from local areas.”