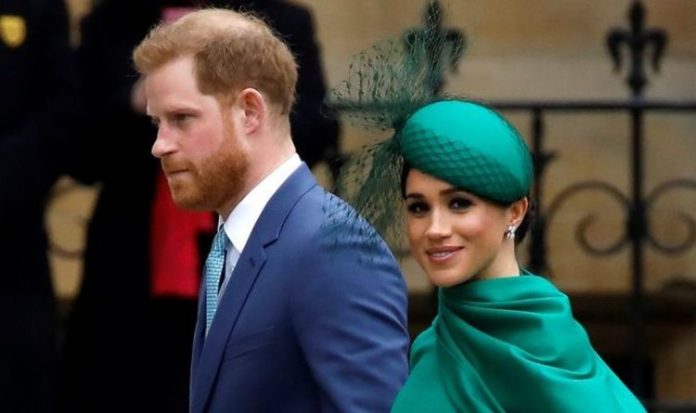 Meghan and Harry said they have no intentions to use their yet-to-be-launched organisation Archewell to rival the UK’s honours list. Archewell’s press secretary Toya Holness said: “We look forward to sharing more about Archewell’s work in the weeks ahead, but any suggestion that it is intended to rival the UK honours list is false.”

claimed on Sunday the Duke and Duchess of Sussex were planning their own honours list.

According to the newspaper, the couple would seek to celebrate leaders in a wide range of fields they deeply care about, from mental health to the environment.

went on citing papers filed in the US for Archewell, claiming they suggested Meghan and Harry’s honours list’s focus would be on the “charitable service, education, science, literature, racial justice, gender equity, environmental stewardship, youth empowerment, health and mental health”.

Firms, charities and individuals, the newspaper added, could expect to be celebrated by Meghan and Harry via their Archewell’s honours list.

Ms Holness’ statement doesn’t appear to entirely dismiss the possibility Meghan and Harry would sponsor awards through their organisation.

However, handing out awards doesn’t necessarily need to spark a rivalry to the honours the Queen awards during the year.

This initiative will see a panel of judges award £1 million to each five winners every year for the next decade.

also added trademark applications for the name of Meghan and Harry’s non-for-profit organisation were first filed in March.

However, they were rejected due to vagueness and lack of a signature and needed to be resubmitted, the newspaper wrote.

Meghan and Harry hit back at this claim too.

Meghan Markle and Prince Harry have yet to launch Archewell (Image: GETTY)

Ms Holness told Vanity Fair: “The trademark application has followed the normal course of business for the US Trademark process and any suggestion otherwise is also false.”

Meghan and Prince Harry first hinted they were working behind the scenes at their new organisation as they bowed out of their Instagram account, Sussex Royal, on March 30.

A few weeks later, in April, trademark applications came to light, prompting the Duke and Duchess of Sussex to explain the meaning behind Archewell’s name and its future mission.

While conceding the launch would not happen soon, they told the Daily Telegraph: “Before SussexRoyal, came the idea of ‘Arche’ – the Greek word meaning ‘source of action’.

“Archewell is a name that combines an ancient word for strength and action, and another that evokes the deep resources we each must draw upon. We look forward to launching Archewell when the time is right.”

In June, a source told Vanity Fair the couple were in “no hurry” to launch the organisation.

They said: “They are in no hurry to launch Archewell, they want to get it right, that’s really important to them.

“This is something that they want to do for the rest of their lives so they’re not going to be pressured into launching something that’s still in the relatively early stages of development.”

In late September, Meghan spoke about her upcoming organisation during a virtual panel part of Fortune’s Most Powerful Women summit.

During her interview, the Duchess of Sussex said Archewell’s focus was on building better, healthier and more humane communities, online and offline.

In October, the Sussexes launched Archewell.com, the official website of their organisation.