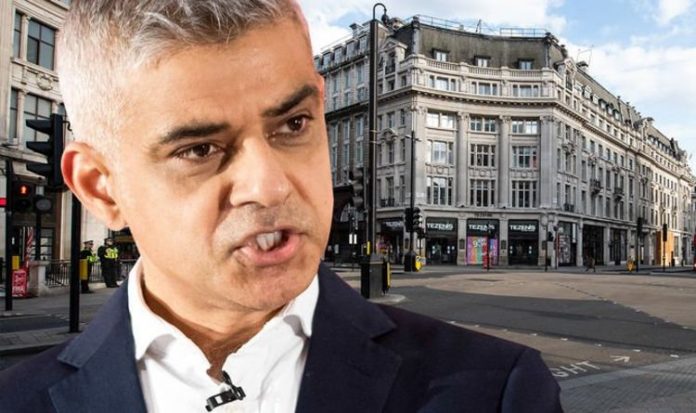 The Mayor of London has warned London could face harsher restrictions as cases continue to rise across the city. Various boroughs have already been forced to impose new measures to combat the spread of the deadly pandemic.

Mr Khan tweeted: “London is at a very serious tipping point in the fight against COVID-19, and we need effective measures to stop the spread.

“This includes a rapid review of the 10pm curfew, given what we’ve seen in the streets outside pubs and bars across the UK.”

His comments come after health chiefs will next week consider new measures to further restrict mixing between households across the capital.

It is believed the capital is heading towards tighter restrictions unless the current measures of the “rule of six” and the 10pm curfew succeed in curbing the spread of the virus.

Mr Khan lashed out at the government for the “rule of six” and 10pm curfew restrictions.

Speaking on BBC Radio London, Mr Khan said: “Look, I’ve got some problems with the way the 10pm curfew is working in London and across the country but it’s worth reminding BBC London listeners, the only reason we’ve got to go down the additional restrictions route is because of the failure to get a grip on the test, trace and isolate system.

“I’m concerned though when I see what’s happening at 10pm and thereafter in pubs, bars and restaurants across London but also across the country and so what I’m saying to the government is they should undertake a rapid review on the effectiveness of the 10pm curfew because I worry inadvertently the virus could be spreading rather than it being reduced by this 10pm curfew.

“That’s why I think that when you’re in a potion of power and influence whether you’re the mayor or the government, you should have the humility to say listen, you know what this may not be working, let’s have a look at this again because it could be counterproductive.”

Latest figures found the number of cases in London had risen above 3,000 a week.

“We must act now and pull together to do our bit and help reverse this trend.”

The hotspots of across the capital are mainly in east London including Redbridge, Barking & Dagenham and Tower Hamlets.

Residents of the borough were told to avoid mixing with other households “unless absolutely necessary” in a bid to slow the spread of COVID-19.

Alarming Government data suggested 143 new infections were recorded in the seven days up to September 28, equating to 44 cases per 100,000 people.

This marked a significant increase compared with the previous week, when the figure was 38.5 cases per 100,000.

Last week, 22 Londoners had died within 28 days of receiving a positive test result, taking the overall total to 6,213.

During the coronavirus pandemic, Mr Khan has been widely criticised for attacking the Government for trying to get the economy up and running again.

In one previous statement he said: “I want to be clear as possible with Londoners – social distancing measures are still in place.

“Lockdown hasn’t been lifted and we all still need to play our part in stopping the spread of Covid-19.

“You must still stay at home as much as possible and keep a safe two-metre distance from other people at all times when you are out.”

However, in August, the London Mayor finally admitted if people continue to work from home, it will have a detrimental effect on central London.

He told LBC News: “The key thing I think we need to understand is that if we all stay at home working it’s a big problem for central London.

“Many small businesses rely on your workers going to work, the café bars, the dry cleaners, the shoe repair shops and others.

“When I meet those not just in the culture industry and hospitality, small businesses they are struggling.

“Of course there’s a choice for you to make a big employer. I love London because of its eco-system.

“I don’t want a hollowed-out London.

“In City Hall we have made sure we have got everything ready, we’ve used July and August to make City Hall safe.”