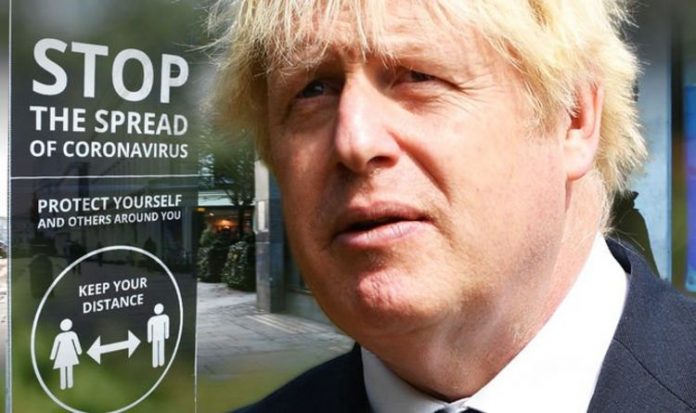 Tory MPs from across the city, as well as the Conservative candidate in next year’s London mayoral elections, Shaun Bailey, have issued a warning to the Prime Minister as his top team of ministers and scientists consider placing the capital into the top Tier 3 when lockdown ends on December 2. The four-week national lockdown ends next week, with the country reverting back to the three-tier lockdown system that has been strengthened since its introduction last month. Mr Johnson will announce on Thursday which lockdown tiers local authorities will be placed into, but warned “most” areas of the country will likely be hit with tougher restrictions which may have to remain in place until at least March 31.

Across all tiers, non-essential shops and gyms are reopening, the “Rule of Six” for outdoor gatherings remains in place, while schools and education facilities would remain open.

But areas of the country placed in the highest tier would be forced to close all indoor entertainment venues and hotels, while pubs and restaurants would only be open for deliveries and takeaways.

Fears are growing London could be hit with these tougher restrictions as according to the latest figures from Public Health England, none of the 32 boroughs in the capital have a coronavirus infection rate below 100 cases per 100,000 people.

However, the Tory MPs and London Mayoral candidate have warned such a move could destroy the city’s entertainment and hospitality industries.

London lockdown: Boris Johnson has been warned against placing the capital under Tier 3 restrictions (Image: GETTY)

Speaking to business leaders via Zoom last night, Mr Bailey said: “I absolutely agree it would be a disaster for London if we were in Tier 3.

‘I’m privately making the case that to get our economy moving, and I mean the country not just London, London cannot be in Tier 3.

“If we are, many businesses will just collapse.”

Senior Tory Sir Iain Duncan Smith has demanded London be placed into Tier 1, which would enable pubs and restaurants to reopen, with up to 4,000 people allowed at indoor and outdoor events.

READ MORE: Hancock hits back at criticism over Covid rules during Eid and Diwali

The former Conservative Party leader insisted that when lockdown ends next week, “London must be put into Tier 1″, and added: ‘London is dominant in the economy and we need it to get back to work immediately.”

London Mayor Sadiq Khan insisted coronavirus infection rates in some parts of the capital are slowing, and that the city should be placed into Tier 2.

He told LBC Radio: “It’s a bit early to say yet, but based on the numbers that I’ve seen, which is a slowdown in the virus spreading, it’s coming down in parts of London in a couple of boroughs.’

“What I hope would happen is London would probably be in what is called Tier Two.”

DON’T MISS
How do I know what tier I’m in? [ANALYSIS]
Lockdown POLL: Should Boris Johnson introduce a new Tier 4? [POLL]
Covid rules: The areas most in danger of being put into Tier 2 and 3 [INSIGHT]

Mr Khan also said: “We need to wait and see the final detail of the plan, but it is vital that London’s shops and businesses, which were forced by the Government to close just as preparations for the festive period began, are allowed to open in a safe and COVID-secure manner.

“The Government should also scrap its ill-judged curfew altogether to support our pubs, bars and restaurants.

“While this is certainly not going to be a normal Christmas, it is more important than ever that no-one has to spend it alone. It is important plans are devised to allow people to spend the festive period with loved ones after such a tough year, but this must be done in the safest way possible.

“Given the sacrifices made over recent weeks and months, it will be crucial that the Christmas period doesn’t see a reversal of the progress made in getting on top of the virus – especially when a vaccine is in sight.

“We have known since the start of the pandemic that an effective test, trace and isolate system is the only way we will be able to properly reduce the spread of the virus until a vaccine has been rolled out widely.

“I welcome the Government’s plans to ramp up mass testing, but there have been broken promises before, so many will be sceptical.

“It is beyond belief that it has taken ministers almost the entirety of this pandemic to fully recognise how crucial testing and contact tracing is.

“We will continue to carefully analyse the data over the coming days to determine the tier London should be in on the lifting of the lockdown.

“Londoners should continue to stick to the rules so we do not waste the hard work and efforts that have been made during this lockdown.”