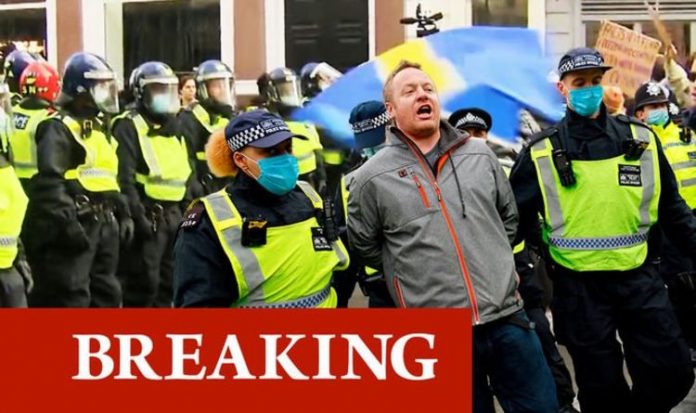 Video footage on social media showed large groups of people staging a rowdy demonstration in Oxford Street in central London, with some pushing past a line of police. Earlier, three people have been arrested for allegedly breaching coronavirus restrictions at King’s Cross station in London, the Metropolitan Police said. The protest has been organised by the grassroots group Save Our Rights UK called Unite For Freedom – Time For Action.

A protest is not a permitted exemption to the prohibition on gatherings under current coronavirus regulations in England and those who attend risk enforcement action by officers, the Met said.

Police led people away in handcuffs from an anti-lockdown protest in London’s Hyde Park.

A large crowd of demonstrators chanting “freedom” left the park near Marble Arch and marched along a road parallel to Oxford Street.

Reporting from the scene, Sky News claimed several bottles had been thrown by demonstrators, some of them smashing, with many heard to be shouting at officers.

Sky suggested the chaotic protests were difficult for the police to control, and “exactly the sort of thing the police had hoped to avoid”.

Numerous arrests had occured in various areas of London, the report suggested.

Police officers were shown walking alongside the protesters who carried placards reading “stop controlling us” and “no more lockdowns”.

Officers asked those in the noisy crowd to go home as the march abruptly changed its direction on the way to Oxford Circus.

Police faced booing from demonstrators and chants of “shame on you” as they intervened.

The current lockdown is due to come to an end of December 3 – but a new system of tiered local resrictions will replace it which critics have suggested amount to a continuation in all but name.