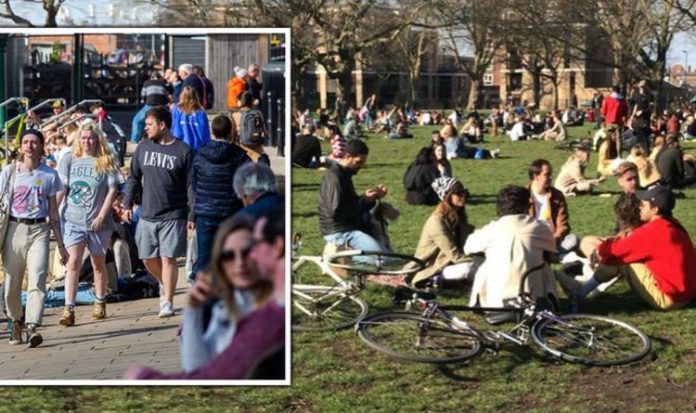 Images seen by Express.co.uk show Hackney’s popular London Fields park packed out as Londoners gather in large groups – contrary to the current guidance, which states only two people can meet outside for exercise purposes. Video footage obtained by this website also shows people sitting down together as they enjoy the sunshine in east London.

Health chiefs have urged people to respect Boris Johnson’s “stay home, save lives” order and to not be tempted to flout the rules by to enjoy the early spring sunshine.

Restrictions introduced on January 4 ban people from leaving their homes to meet anyone outside their household or support bubble and also reaffirm the two-metre social distancing rule.

But parks, beaches and other outdoor spaces were packed today and pictures showed gatherings of large groups of people showing little or no regard for the lockdown restrictions.

Temperatures were forecast to reach highs of 13C in parts of southern England while most areas across the UK were expected to enjoy a sunny 10C.

But England’s deputy chief medical officer Jonathan Van-Tam has urged people across the country to stay disciplined and “don’t wreck it now”.

Professor Van-Tam warned there were “some worrying signs that people are relaxing” in the coronavirus battle at “exactly the wrong time”.

He said: “All the patients that I vaccinate I say to them, ‘Remember, all the rules still apply to you and all of us until we’re in a much safer place’.

“It doesn’t change because you’ve had your first dose of vaccine.

“And so, please don’t be tempted to think, ‘Well, one home visit might be all right now the weather is getting better, going to be a nice weekend, one small gathering in your house won’t really matter’.

“So my key message tonight is look, this is all going very well but there are some worrying signs that people are relaxing, taking their foot off the brake at exactly the wrong time.”

Prof Van-Tam said his inbox had been “besieged” recently with people asking “can I go and see my grandchildren and do X, Y and Z?”

He said: “The answer to that is no.

“We are not yet collectively, as a country, in the right place.”

He compared the situation to a football match, adding: “It is a bit like being 3-0 up in a game and thinking, ‘We can’t possibly lose this now’ – but how many times have we seen the other side take it 4-3?

“Do not wreck this now. It is too early to relax. Just continue to maintain discipline and hang on just a few more months.

“Much as it is encouraging and much as I am upbeat about vaccines and how they are going to change how we live and what the disease is like between now and the summer, there is a long way to go.”

It warned those who had received a jab might be less inclined to stick to the rules unless the science behind transmission is explained to them.

And it said the success of the vaccine rollout may mean even people who have not had a dose may “perceive there is no longer a major risk to vulnerable people”.

Sage noted 20 percent of UK adults have received a first dose of vaccine while 16 percent believe they have recovered from the virus – a belief associated with perceptions of immunity.

It warned these figures may create the impression the threat has permanently receded, making it harder to stick to restrictions on seeing friends or family.