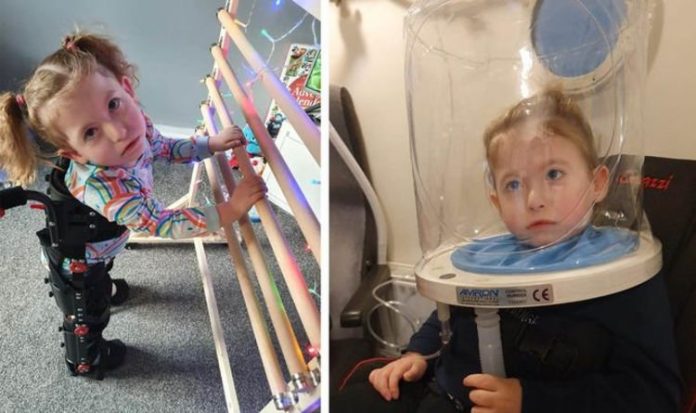 It has paralysed Freya’s facial nerves – leaving her unable to smile or blink – and left her with muscle weakness so she cannot walk or eat properly. An expensive vibrating-plate Galileo machine has dramatically boosted her movement and happiness but not available on the NHS. Now her parents, of Horwich in Bolton, Greater Manchester, are fundraising at least £5,000 to buy her own machine to transform her life.

Mum Sophie Lock, 24, told the Daily Express: “Freya cannot speak or even sit unaided. Her upper body strength is like a baby’s.

“Her Moebius syndrome is quite severe. She will never be able to smile or blink and cannot feed herself.

“I’m her nurse, speech and language specialist or her physio 24 hours-a-day. I never feel like I’ve any time just to be her mum.

“But after we paid for her to try a Galileo vibrating machine at a private clinic in Liverpool we saw amazing results.

“She was like a different child and was rolling herself around the floor, giggling to play with her toys.”

She was born with bowels on the outside, requiring complex surgery and not allowed home from Manchester’s St Mary’s Hospital until she was nine months old.

The condition means she has to be on a ventilator at night and, due to a club foot, must sleep with a boots and bar brace.

She has to be PEG (percutaneous endoscopic gastrostomy) fed via a tube going through her skin, into her tummy.

Sophie is a trained hairdresser but like many has been unable to work in lockdowns, while Michael works for delivery firm Amazon.

The mum described their daughter as having an amazing personality but she is frustrated as her condition leaves her unable to fully express herself.

Sophie explained: “Although she cannot physically smile she has a laugh that lights up your day and takes all our problems away.

Freya has ‘an amazing personality’ but is ‘frustrated by condition’ (Image: Facebook)

“She has a naughty little giggle a kicks her legs when she’s excited and happy.

“She loves us rolling about with her and just being a bit daft. She really enjoys being read stories.

The Galileo machine stimulates her muscles and teaches her to balance herself so she can learn to step and walk – while boosting muscle tone too.

Sophie and Michael Campbell are desperate to buy their own machine from the German firm so she can use it every day.

Sophie said: “We have been shielding for most of the year. She needs help with everything, at night she is on a ventilator.

The tot loves being read stories and has a naughty giggle (Image: Facebook)

“She get’s unwell very easily so it’s been a difficult year. Fortunately, we’ve had virtual physio sessions which have helped.

“We were lucky enough to have a trial session with the Galileo machine in Liverpool and I noticed a huge difference.

“After using it she’s started rolling around our living room – which is the only way for her to travel.

“It’s amazing for me as a mum to see that; I can’t explain how it makes me feel.

“She can’t communicate verbally so sometimes its hard for me to know what she wants. It’s also helped her relax her arms too.”

The machine isn’t available via her NHS physio, is manufactured in Germany and costs around several thousands of pounds.

Freya can’t communicate verbally and struggles to express what she wants (Image: Facebook )

They are also keen to fund a £70-every-six-weeks care package that offers physio help and care support with the machine.

Sophie added: “If we could have our own machine that would be incredibly helpful.

“They recommend using it for half an hour a day so it would make a big difference.

“We’ve had a really positive response to the fundraiser so far, and businesses have come forward to donate raffle prizes which is amazing.

“I’m overwhelmed already by how generous people have been.”

* To donate via the Just Giving Page here: www.justgiving.com/crowdfunding/sophie-lock