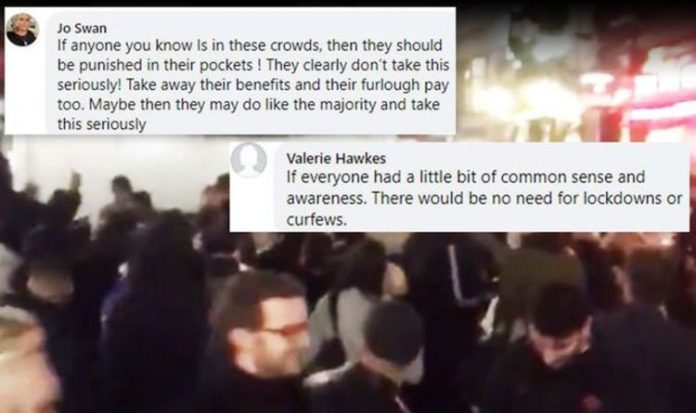 Earlier this week, Prime Minister announced a raft of new measures to combat a huge recent surge in COVID-19 infections, including ordering pubs, bars and restaurants throughout England to close at 10pm from last Thursday. But scenes soon began circulating around social media of large crowds gathering on usually busy streets in London after the pubs had closed. Footage uploaded to Twitter shows an improvised street party with large numbers of people dancing and not observing the strict social distancing rules.

In the tweet accompanying the footage, a Twitter user wrote: “Day two of a 10pm curfew: Oxford Circus has turned into an impromptu party.”

The Express.co.uk story, along with the clips, have sparked outrage among Facebook users, who lashed out at those clearly flouting social distancing rules at a time when coronavirus cases are surging throughout the capital and the country as a whole.

Jo Swan commented: “If anyone you know Is in these crowds, then they should be punished in their pockets! They clearly don’t take this seriously!

“Take away their benefits and their furlough pay too. Maybe then they may do like the majority and take this seriously.”

In an emotional message, Chris Page wrote: “I live alone. I can’t visit family and friends but these idiots can go in a pub with whoever is in there and then gather in a crowd! Utter morons the lot of them!

“It will take them to lose someone close for them to realise this is not a joke but a reality, and a dangerous one too!

“As my sister said, it’s time they woke up and smelled the coffee while they can still smell it!

“Bring out the fire hoses on them and sod their human rights. They gave them up when they took mine away to visit family.”

Several people could be seen close together outside pubs and bars in Oxford Circus (Image: @charliehtweets/Twitter)

Valerie Hawkes commented: “If everyone had a little bit of common sense and awareness, there would be no need for lockdowns or curfews.”

Alice Hennessy also lashed out at the people flouting the strict rules, and called for more police officers and even the army to be brought in.

She said: “This is absolutely disgraceful. We are never going to get rid of this virus if this keeps happening.

“Where are the police and army? Don’t promise Take action now.”

Pubs, bars and restaurants have been told to close at 10pm (Image: PA)

Metropolitan Police deputy assistant commissioner Matt Twist said the “vast majority of Londoners” have respected the rules and “responded positively to the unprecedented situation we are in”.

He added: “We urge the public to continue to report serious breaches to us via the 101 telephone system or using our online reporting system.

“However, we should all bear in mind that there are a number of exemptions to the rules which may apply to any situation so an apparent breach may not be what it appears and not every call may generate an immediate police response.

“Additionally, demands on the Met from crime, non-COVID related anti-social behaviour and protests are returning to pre-COVID levels so we will continue to respond to these alongside the pandemic in order to keep Londoners safe.”

The latest shocking scenes come after London was placed on the official coronavirus lockdown watchlist as the number of infections across the capital continues to surge.

London Councils, a cross-party organisation which represents all 32 boroughs and the City of London, said no additional measures were being taken in the capital.

But it warned the entry on the list is a “stark reminder that now is time for all Londoners to pull together and take action to keep themselves, their families and their communities safe, and to ensure that London’s economy is protected”.

Mayor of London Sadiq Khan warned the capital is at a “very worrying tipping point right now” with the recent surge in coronavirus infections.

He said in a written statement: “London is at a very worrying tipping point right now. We’re seeing a sharp rise in 111 calls, hospital admissions, and patients in ICU.

“The near collapse of test and trace and resurgence of the virus means new measures to slow its spread were absolutely necessary.

“Testing capacity was diverted away from London in the past two weeks to other national hot spots, and the weekly numbers are now down 43 percent in the capital since mid-August.

“The lack of testing capacity is totally unacceptable and is why London has been added to the Government’s coronavirus watchlist as an area of concern.

“Ministers simply need to get a grip. It’s vital that testing capacity is increased immediately in London and focused in the areas that need it most.

“Any delay will mean letting the city down and will cost lives.”