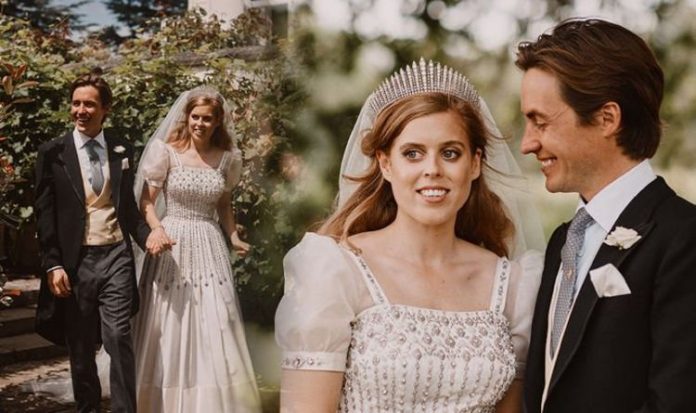 Princess Beatrice and Edoardo Mapelli Mozzi married in July, after they were forced to delay their wedding due to coronavirus. Beatrice and Edo announced their engagement in November last year, and were originally planning on marrying at the Chapel Royal, St James’s Palace, on May 29.

The Queen was due to hold a special reception for her granddaughter after her nuptials in May, but unfortunately the lockdown prevented her from doing so.

Instead the Queen and Prince Philip were part of a small group of guests, who watched Beatrice and Edoardo marry at the Royal Chapel of All Saints at the Royal Lodge, Windsor.

The date of the wedding was not announced in advance to the public, and unlike most royal weddings the public were not allowed to gather outside the chapel.

As Edoardo has a son called Wolfie from a previous relationship, who served as Edoardo’s best man for the big day, Beatrice became a step-mother as well as a wife when she married.

Eugenie recently announced she is expecting a baby with her husband, Jack Brooksbank, and her baby will be eleventh in line to the throne.

But should Beatrice and Edoardo choose to have a child of their own some day, their child would take Eugenie’s place as tenth in line to the throne.

Did Edoardo get a royal title?

When Edoardo married Princess Beatrice he did not receive a new royal title, as is often the case for members of the Royal Family.

When Prince Harry married Meghan Markle in 2018, he was appointed the Duke of Sussex, and Meghan subsequently became the Duchess of Sussex.

However this was on account of Harry’s position as sixth in line to the throne, and at the time he was a working member of the Royal Family.

When Beatrice’s sister Princess Eugenie married Jack Brooksbank in 2018, neither received a new royal title either.

But prior to marrying a member of the Royal Family, Edoardo’s family already held a courtesy title.

Edoardo’s father is Count Alessandro Mapelli Mozzi, and he told Mail Online prior to his son’s wedding: “Edoardo is the only male descendent taking the family into the next generation.

“He is a count – his wife will be a countess automatically and any of their children will be counts or nobile donna.”