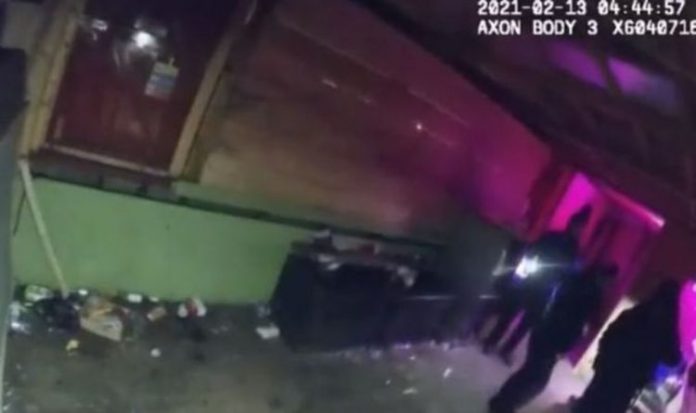 Officers responded to reports of a large gathering of people playing music on a boat on the River Lea between Tottenham Lock and Hackney, during the early hours of Saturday morning. Crews from Hackney Police stormed the boat, located off Hackney Marshes, at 4.20am and found around 30 people on board.

The force said a 31-year-old man has been arrested on suspicion of breaching coronavirus regulations.

In a statement, the Met said the man was previously reported for consideration of a £10,000 fixed penalty notice for organising a similar gathering less than a fortnight ago.

The Met confirmed 26 others were reported for the consideration of fixed penalty notices of £800 for breaching COVID-19 rules.

Officers from the Marine Policing Unit secured the boat and seized music equipment, keys and generators.

Chief Inspector Pete Shaw, in charge of Covid policing in east London, said: “It is incredibly disappointing that incidents of this nature continue when the vast majority of Londoners are doing the right thing and making huge sacrifices to stop the virus spreading.

“Each breach of the regulations not only presents a risk to the groups congregating but also to the officers who have to deal with it.

“To have an individual who has repeatedly ignored these regulations and who appears to have organised multiple events is dangerous and indicates a complete disregard for the safety of all involved.

“We need to be doing everything we can as a community to try and keep ourselves, our family and friends as safe as possible and to reduce the pressure on the NHS.”

Figures from ACRO Criminal Records Office show 196 of the £10,000 lockdown fines have been issued to organisers of gatherings of more than 30 people, including raves, parties and protests, in England between August and December last year.

It comes as the Government said a further 621 people had died within 28 days of testing positive for Covid-19 as of Saturday, bringing the UK total to 116,908.

Separate figures published by the UK’s statistics agencies for deaths where Covid-19 has been mentioned on the death certificate, together with additional data on deaths that have occurred in recent days, show there have now been 135,000 deaths involving Covid-19 in the UK.

The Government also said that, as of 9am on Saturday, there had been a further 13,308 lab-confirmed cases of coronavirus in the UK.

Meanwhile, Prime Minister Boris Johnson warned today that coronavirus is a disease which people will have to “simply live with”.

Speaking during a visit to a vaccine manufacturing facility in Teesside, he said Health Secretary Matt Hancock was right to say Covid-19 could become a “manageable disease” like seasonal flu.

“The miracles of science are already making a huge difference, not just through vaccinations but therapies as well. New therapies are being discovered the whole time which are enabling us to reduce mortality, improve our treatments of the disease.

“I do think that in due time it will become something that we simply live with. Some people will be more vulnerable than others – that’s inevitable.

“I think the Health Secretary spoke about the autumn. Let’s see where we get to.”