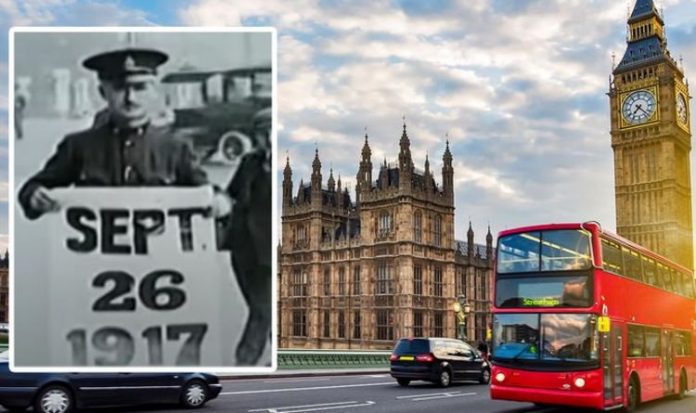 The largest city in England has been a major settlement for almost two millennia – since Londinium was founded after the Roman Empire invaded in 43AD. The City of London – the capital’s ancient core and financial centre stretches over an area known as the Square Mile and retains boundaries that closely follows its medieval limits. The adjacent City of Westminster has for centuries been the location of much of the Government and there are 31 additional boroughs north and south of the River Thames that also comprise modern London.

The area has undergone vast changes over the years to become one of the most important cities in the world, and some of those were shown in incredible detail by YouTube channel ‘Yestervid’.

Their ’Oldest Footage of London Ever’ documentary includes reels of old film combined with modern shots of the same location.

It also features maps to show “where the camera was” when the footage was taken.

The video starts in Westminster, at Parliament Square, looking across Big Ben – and shows other notorious attractions such as Westminster Abbey, the Houses of Parliament and Downing Street.

Viewers are then taken back in time in Embankment, to see Cleopatra’s Needle, the Egyptian Lions and Blackfriars Bridge as they were decades earlier.

More footage shows St Paul’s Cathedral, Tower Bridge and the Tower of London, before moving on to The City, and the West End.

And viewers were taken back by the differences they could see.

Another stated: “Wow that is incredible!”

A third noted: “This carefully researched and lovingly edited artefact is a thing of beauty.”

And a fourth also said: “Downing Street was just another street then. Now it’s a fortress.”

It is not just what can be seen above the ground that has changed in London over time.

One of which was a Postmaster General’s secret passage beneath 57 Whitehall built to “protect machinery and communications from the threat of a nuclear blast” during the Cold War.

The tunnel was said to be connected to a secret underground labyrinth, which emerged “unobtrusively” into government buildings and various telephone exchanges.

This is believed to have included a “bomb proof” space deep underneath High Holborn street – originally built as a deep-level Government air raid shelter in the early Forties.

It is said to have been a “top secret hub of more than 200 engineers from the Sixties to the Eighties” but was later converted to become the termination point of the first transatlantic telephone cable.

Author Mark Ovenden believes some of these structures date back to the Industrial Revolution when London became the busiest and most modern city in the world in the 18th century.

There was reportedly much more of a need to use the spaces below the city than there had been pretty much anywhere else.

Project Iceberg, a collaboration between the Connected Places Catapult, the British Geological Survey and the Ordnance Survey is attempting to bring together all of London’s subterranean features.

This includes more than 900,000 miles of underground water, sewer, gas and electricity services in the UK.