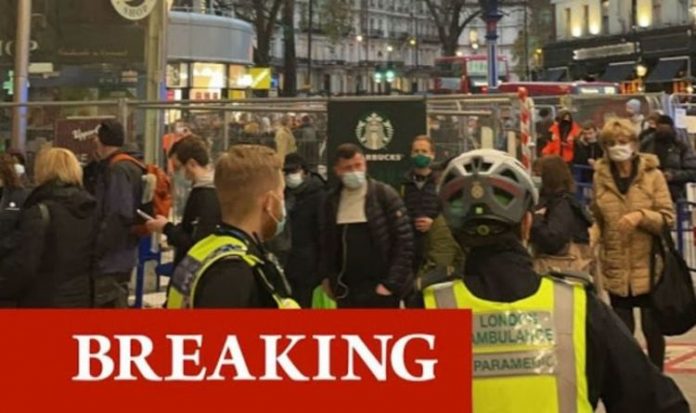 Commuters were promptly evacuated from the station concourse as police and fire crews rush to the scene. A small fire broke out on the outside of a train arriving into Platform 9 at about 3.40pm, according to a Network Rail spokesman. Video footage from the scene shows crowds of people being ushered out of the station, while a tannoy loudly repeats: “All passengers must leave the station immediately”.

A spokesman for Network Rail told Express.co.uk a “small fire” broke out on a train which was “put out immediately”.

He said this triggered the fire alarm which resulted in the mass evacuation of the entire station at 3.40pm.

The all-clear was announced at 3.53pm, with passengers allowed back into the station.

It is not yet known how the fire started.

Photographs of the evacuation were posted on social media, showing dozens of people waiting outside the station, with gates preventing anyone from entering the concourse.

They said in a statement on their website: “The emergency services are dealing with an incident at London Victoria resulting in all lines being blocked.

“As a result of this, trains may be cancelled or delayed. Major disruption is expected until 17:00.

“London Victoria Station is currently closed. Please do not try and travel from this station until further notice. Out Southern train services will be severely disrupted this evening. If you can delay your travel until later it is advisable to do so.”

Shortly before 4pm London Victoria reopened, but platforms 9 to 12 are currently out of use.

Southern Rail wrote on Twitter: “The incident at London Victoria was a small contained fire at one of our platforms, the fire brigade have attended and confirmed the fire is out.

“The station has reopened and we are working on a plan to get trains moving again. Thank you for your patience at this time.”

Peter Kyle, the Labour MP for Hove and Portslade, also wrote about the incident.

He wrote on Twitter: “A train has caught fire in Victoria Station, the station evacuated and all inbound trains are being rerouted Police cars revolving light.

“If you’re planning on travelling soon via Victoria please check before you leave (I write at 4pm).