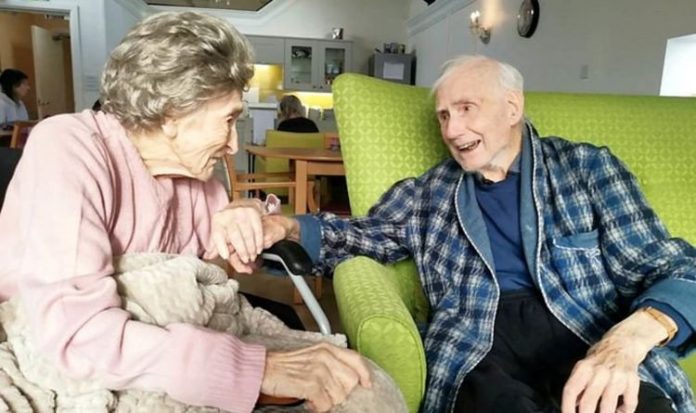 Frank Howell, 90, and his wife Joan, 93, were able to celebrate their platinum milestone after they moved into the same care home so they could be together. The devoted pair had been inseparable since tying the knot in 1951 and had never spent longer than a few days apart until the Covid-19 outbreak. Retired carpet fitter Frank was forced to move into a care home last September with dementia and bladder cancer.

The couple, who have two sons, were kept apart for five months until they were finally reunited on February 2, when Joan joined her beloved husband following a fall at her home.

It meant they were able to celebrate Valentine’s Day as well as their 70th wedding anniversary together last Friday. The great-grandparents toasted the occasion with tea and cake, surrounded by balloons, while opening cards from well-wishers – including one from The Queen.

Staff at Astley Hall Nursing Home in Stourport, Worcester, say the pair now spend all day together “holding hands and having a natter” and their quality of life has improved dramatically since they were reunited.

When asked the secret to a long and happy marriage, former nurse Joan said: “We have always gotten on. I love Frank very much and always have.”

The pair spent their anniversary looking over old black and white pictures from their wedding.

Son Andrew, 60, said: “Unfortunately we were not able to be there with them for their anniversary but we’re so glad they could spend the day together.

“Dad went in for end-of-life care because he has severe bladder cancer and was only given a few weeks to live, but he has thrived.”