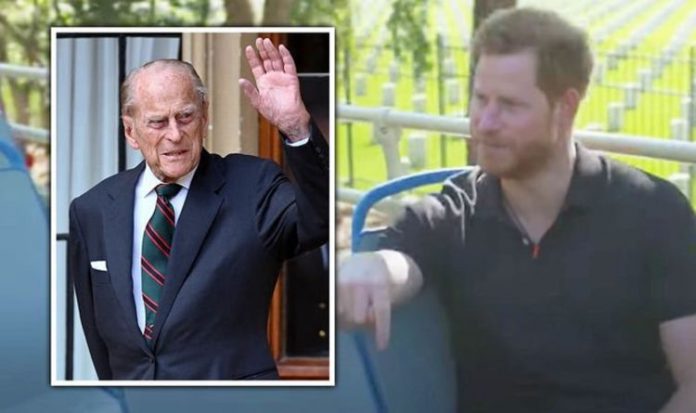 Harry spoke about calling his grandfather during his first appearance on TV since he stepped down as senior royal. Harry revealed he has kept in touch with both his grandparents via video call over the past 11 months, during an episode of The Late Late Show with James Corden. And he shared one hilarious detail regarding Prince Philip and how he ends video calls.

Rather than pressing the button to end the meeting, the Duke of Edinburgh simply shuts down the device he is using to speak to his grandson, Harry said in fits of laughter.

TV host and friend of the Sussexes Mr Corden asked the Duke: “Does the Queen know how to use Zoom?”

To which Harry replied: “Yes, both my grandparents do.

“They have zoomed a few times, they have seen Archie running around.

“But my grandfather, instead of pressing leave meeting he just goes [Prince Harry mimics closing a laptop].

Prince Harry’s appearance in an episode of Mr Corden’s show marks the first time he has been on a TV show since officially stepping down as senior royal.

During the chat aboard an open double-decker bus, Prince Harry touched upon how his romance with Meghan blossomed, what his son Archie is like and his life after Megxit.

Asked what he expects life to be like after lockdown now that he is no longer a full-time working royal, Harry said: “I have no idea, a slightly different version but a continuation of what we were doing back in the UK anyway.

The Duke again expressed his intention to continue to lead a life of service when speaking about the decision he took in January 2020 about his future role within the Royal Family.

He said: “As far as I am concerned, whatever decisions are made on that side, I will never walk away, I will always be contributing.

Prince Harry’s chat with James Corden was filmed in early February – weeks before the Queen officially announced her decision to strip the Duke and Duchess of Sussex of their royal and military patronages.

Last Friday, Buckingham Palace said the Queen told Meghan and Harry that, in light of their decision not to return as full-time working royals at the end of the 12-month Megxit review period, it would be impossible “to continue with the responsibilities and duties that come with a life of public service.”

The statement added: “The honorary military appointments and Royal patronages held by The Duke and Duchess will therefore be returned to Her Majesty, before being redistributed among working members of The Royal Family.

The Duke and Duchess of Sussex issued their own statement a few minutes after the Queen’s was shared with the public, saying: “As evidenced by their work over the past year, The Duke and Duchess of Sussex remain committed to their duty and service to the UK and around the world, and have offered their continued support to the organisations they have represented regardless of official role.

Prince Harry moved to California in late March and has since settled down in his new family home in Montecito, Santa Barbara.

Due to travel restrictions, the Duke and Duchess of Sussex have not been able to return to the UK over the past year.

However, following news of the hospitalisation of Prince Philip, Harry was said to be self-isolating to be able to dash across the pond if the Duke’s condition worsened any more.