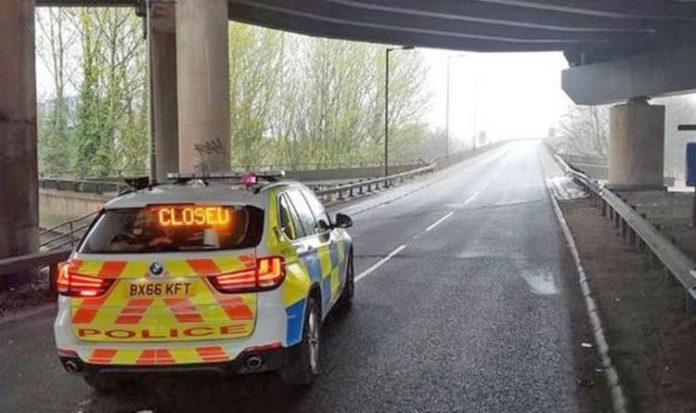 The busy motorway was closed in both directions between junctions 2 and 3 near Oldbury after this morning’s incident, reopening at 2.45pm. Officers said the teenager was taken to hospital with serious injuries.

A West Midlands Police spokesman said: “The M5 is currently closed in both directions between junctions two and three after a pedestrian was hit by several cars at around 11.15am today.

“The pedestrian, believed to be in his teens, has been taken to hospital with serious injuries.”

An air ambulance was sent to the scene but the boy was taken to Birmingham Children’s Hospital by road.

A West Midlands Ambulance Service spokesman, said: “The boy was on foot at the time of the incident. He has suffered serious injuries.

“He was assessed and treated at the scene before being taken on blue lights to Birmingham Children’s Hospital; the doctor from the air ambulance travelled with the boy to hospital.

“There were no other patients.”

It is not clear how the boy came to be walking along the motorway and West Midlands Police have launched an appeal for witnesses.

A spokesman said: “Inquiries around how the boy ended up on the motorway are at an early stage.

Another spokesman later added: “A 15-year-old boy remains in hospital with serious injuries.”

Traffic was allowed past the scene on the hard shoulder and slow lanes for a short while but the motorway is now completely closed again as crash investigation specialists gather evidence.

Photos from the scene show a damaged silver car with a a lorry and another car stopped nearby.

Both northbound and southbound traffic was diverted around junctions 2 and 3 via Birchley Island on the A456 and A4123.

Highways England said there was around two and a half miles of congestion on the southbound approach but that delays northbound had “significantly reduced”.

Motorists were urged to consider using the M42 and M6 around Birmingham.

“Thank you for your patience whilst this incident was dealt with.”