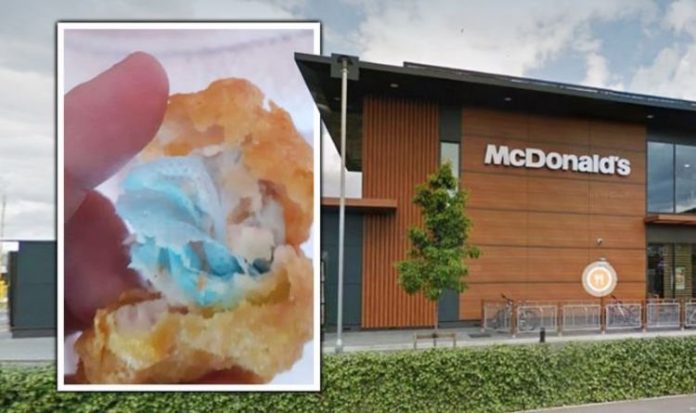 Laura Arber, 32, feared her daughter Maddie “could have died” after she began to choke on the fast food meal. The mum-of-four had picked up dinner for her children from the North Lane branch in Aldershot at around 6pm yesterday before taking back home to enjoy on the sofa.

But the evening treat quickly turned into a dinner from hell when Maddie began choking on a face covering which had been cooked in with the batter of multiple chicken nuggets.

She said: “My little daughter just started choking and I put my fingers down her throat to loop it out there was just blue with the sick.

“I thought what on earth is this?

“I didn’t even think it could be the chicken nugget but looked over at the box and all you could see was this blue coming out of another chicken nugget in the box of 20.”

She continued: “The mask is cooked into it, like a part of the mixture and it’s clearly a mask.

“You can see the seam and how solid it is in there.”

Laura immediately phoned the McDonald’s branch following the shocking experience before heading down to the outlet to speak to the manager in person.

To her dismay, the mum says McDonald’s did not offer her an apology.

She was also left stunned when the branch said they had no intention to stop serving the nuggets while they investigated the incident.

She said: “Before I left I said ‘Are you going to keep serving them?’ And they were carrying on serving them and that was the big thing for me.

“I just couldn’t believe the way the management were handling it.”

Laura said she was particularly disappointed as she had always admired the company for its Ronald McDonald House Charity.

The charity provides free housing for families while their children are in hospital.

Laura said stayed in one of the houses when her son was born in intensive care.

McDonald’s closed all its restaurants in the UK and Ireland when lockdown measures were announced by Boris Johnson on March 23.

Huge queues formed outside branches of when the fast food giant reopened some of its UK drive-thrus in May.

Customers were warned service would “not be as quick as you might be used to” and asked visitors to be “patient and supportive” of staff.

The chain reopened for walk-in customers last month after opening for deliveries and takeaway earlier in lockdown.

But it has since had to close branches in the West Midlands and Greater Manchester after outbreaks of coronavirus among staff members.