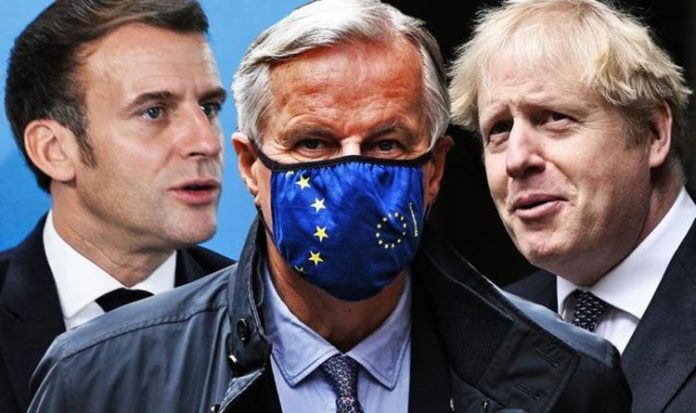 The UK and the EU are under intense pressure to agree a trade deal but Downing St insists there will be “no backsliding on Brexit”.

No 10 was rocked last week by the departure of chief adviser and Vote Leave maestro Dominic Cummings, which prompted Brexit Party leader Nigel Farage to warn that a “sell-out is close”.

He said: “The Leavers are leaving Downing St.”But prominent Brexiteer Andrew Bridgen said Mr Cummings could safely leave the stage because Britain is now out of the EU.

He said: “When the dragon is slain, you don’t need a dragonslayer anymore.”

Tories hope Mr Johnson can put a tumultuous week behind him and the country will see the return of “a full bouncing Boris”.

Frustration had bubbled in Tory ranks about a series of public relations disasters in the weeks leading up to the sudden exit of Mr Cummings and director of communications Lee Cain.

The UK and EU will hold talks this week in Brussels ahead of a meeting of European leaders on Thursday.

Even if a draft deal can be nailed down, it will be a race against the clock to get it ratified by the member states before the Brexit transition period finishes at the end of the year.

Downing St sources say it is ridiculous to link Mr Cummings’s exit with the Brexit talks led by David Frost and leading Tories insist Britain is in a strong position.

They argue a major deal can be done but that the country can still prosper if it has to rely on World Trade Organisation terms.

The UK and the EU are under intense pressure to agree a trade deal (Image: Express )

Former security minister Sir John Hayes said: “Of course it’s true that coming to an agreement is going to be challenging for all concerned and painful for those in Europe that are still wedded to the fading prospect of federalism which they see as a dream and we see as a nightmare. But I still think there’s a chance that common sense may prevail…

“Of course, if a deal can’t be done on terms that are acceptable to Britain they we must face up to that. There must be no compromise of our core principles and there must be no toning down of our red lines. Our red lines must not be made pink.”Brexit Party chairman Richard Tice urged Mr Johnson to be ready to walk away from the negotiating table.

He said: “Boris must stand strong against the EU this week. No deal is always better than a bad deal. “If he caves, he is finished. If he holds firm, he can survive; it is as simple as that.

“He must not take the British people for fools”North West Leicestershire MP Mr Bridgen said the EU was frightened at the prospect of a free-trading UK on its doorstep and Britain must not be pressured into signing-up to a damaging treaty.

Nigel Farage has warned that a ‘sell-out is close’ (Image: Getty )

He said: “You’ve got a trading block that is scared to do a free trade deal with their biggest customer because a free, independent, sovereign Britain trading with the rest of the world will economically out-perform them and they know it… That’s why we’ve got to hold our nerve because there might be a little bit of short-term disruption while we readjust but a bad treaty with the EU will be forever.”

A key sticking point has been the rights of vessels from EU states to fish in UK waters but Brexiteers predict French President Emmanuel Macron will be forced into a humiliating climbdown.

Former Brexit minister David Jones urged British negotiators to “remain firm” in the talks, saying: “[We] will be an independent coastal state which means Macron will  have to eat humble pie and admit that he’s over-promised to the French fishermen.

Tories hope the country will see the return of a ‘full bouncing Boris’ next week (Image: Getty )

Mr Jones is adamant that the UK must not extend the Brexit transition period, which would require Britain to make a new round of financial contributions.Jack Rydeheard of the Tory grassroots organisation Conservative Progress, stressed that Britain’s negotiators should not be afraid to quit the talks.

He said: “I hope the government stands firm for the interests of our country, and walks away if the EU refuses to compromise on our reasonable red lines, on fisheries and state aid. A deal is preferable but is not essential, and we should not give too much ground in order to get an agreement.”

John Longworth, chairman of the Independent Business Network, agreed, saying: “A ‘no deal’ is far more damaging to the EU than it is to us.”A new report from the group Briefings for Britain argues that the costs of a no-deal Brexit have been seriously exaggerated.

Co-author Julian Jessop, an economics fellow at the Institute of Economic Affairs, said: “Predictions of imminent economic disaster if the UK voted to leave the EU proved to be hopelessly wrong… It would be better to exit the transition period with a new and balanced free trade agreement in place, but this does not mean that the UK should simply accept whatever the EU is willing to offer.”

While Britain’s negotiators work to nail down a new relationship with the EU, Tories hope Mr Cummings’s departure will lead to stability in Government and better relations between MPs and Downing St.

Senior Brexiteers have welcomed suggestions that the “highly respected” David Canzini, who has worked with electoral strategist Sir Lynton Crosby, is a strong candidate for the chief of staff post. It is also hoped that the controversial reforms to the civil service that Mr Cummings had hoped to push through will not be abandoned.

Former International Development Secretary Andrew Mitchell said: “Whatever you say about Dominic Cummings, he was right to say that the civil service needs to become a core of experts rather than a core of generalists. He is right about that and Whitehall mustn’t lose the opportunity to embrace that change.”

Former Army captain and defence committee chairman Tobias Ellwood said: “The departure of senior advisors who brought discipline and focus to securing Brexit and winning an election now offers the opportunity for a major overhaul.”

No 10 was rocked last week by the departure of chief adviser Dominic Cummings (Image: Getty )

Warning that the country faces “months of uncertainty and difficulty” as the pandemic continues, he called for a “national task force run from a situation centre”. He added: “Let’s also get back to proper Cabinet-led decision making.

The Prime Minister should re-shuffle his top team, bringing a series of talent-driven moves to the key seats around the top table and empowering them to deliver their portfolios so No 10 is less overwhelmed. ”MPs admit Government communications “could be better” and have been a “bit of a mess”.

There are fears that without a new message the Conservatives face an “existential threat” at the next election when Brexit should no longer be an issue and voters will not fear a Jeremy Corbyn government.

There was deep frustration at the Government’s response to footballer Marcus Rashford’s campaign for Britain’s poorest children to be fed during school holidays.

The Government suffered days of negative headlines before announcing a £400million-plus support package.A former cabinet minister said such debacles could have been avoided if there had been “sufficient horizon-scanning and avoidance of elephant traps,” adding: “There is a feeling we need people of more experience in there.”

There was also a sense that under Mr Cummings the No 10 operation did not “really understand Parliament”. A senior backbencher said Covid-19 restrictions had made it harder to build bonds between the government and newly-elected MPs because in-person events such as party conference and traditional receptions could not take place.

The source warned that “those new MPs have never been brought into the fold” and this could lead to them “no longer circling the planet Boris”.However, supporters of Mr Johnson do not fear that the Downing St row will weaken his standing with voters.

Lee Anderson, who won the former Labour seat of Ashfield for the Conservatives last year, said: “What I do understand is that the Prime Minister was amazing for us in the Red Wall seats on the doorstep during the election campaign and is still our best asset.”