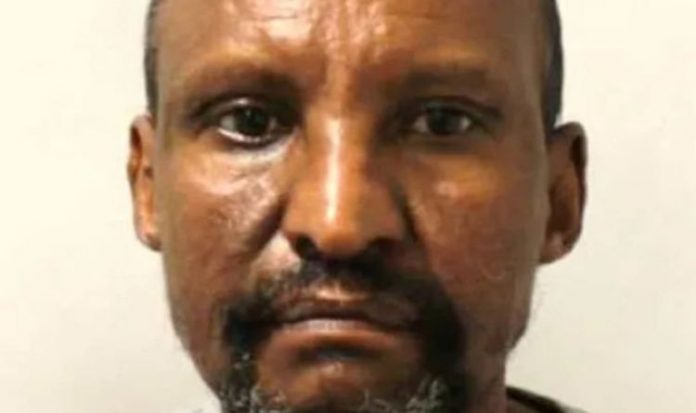 The court heard he used a knife, hammer, meat cleaver, pots, pans, a table leg and a ladder to bludgeon her to death. Egal admitted manslaughter, but denied it was murder. He claimed during the trial that “coronavirus had made him crazy and kill his wife”.

The court heard that prior to the row Egal had been displaying symptoms of COVID-19, namely coughing, vomiting, hallucinating and a high temperature.

But, he did not alert anyway to his wife’s death until the next day.

Police were called at about 6pm on April 6 last year by a member of the public who egal confessed the killing to in the foyer of the flats where the couple lived in Edmonton, north London, centre below.

When police arrived Egal told them he had killed his wife Maryan Ismail, 57, the previous morning.

A Met Police spokesman said: “Other officers attended the scene and were directed to the flat the couple shared.

“The officers received no reply at the address and when trying the door, the flat was found to be unlocked.

“In the living room they found Maryan, she had been covered with a purple duvet and appeared to have been dead for some time.”

She had suffered extensive head injuries as well as multiple other injuries all over her body.

Paramedics from the London Ambulance Service pronounced her dead at the scene.

A special post-mortem examination was conducted on April 8, 2020 and gave the cause of death as multiple injuries.

Egal was interviewed by police and provided a statement saying he had argued with Maryan after he developed symptoms of COVID-19 and she asked him to move out.

He stated that Maryan had attacked him and he had defended himself.

Egal was charged with murder and kept in custody.

Detective Sergeant Lucy Carberry, of the Met’s Specialist Crime, said: “The officers who discovered Maryan’s body were faced with a truly terrible scene. Maryan had suffered extensive injuries and the turmoil and disorder in the flat showed there had been a considerable disturbance.

“Egal claimed he was defending himself, but there was no indication of him suffering any injuries.

“This was a wanton act of violence, carried out with sheer ferocity. It is important, particularly in the current climate with isolation and periods of ‘lock down’ that all of us do everything we can to stop domestic violence.

“If you are suffering from domestic violence I implore you to seek help, if you feel in danger, always call police.

“If you suspect someone is suffering from domestic violence make the phone call and tell police. That call could save a life and save you from a lifetime of regret.”