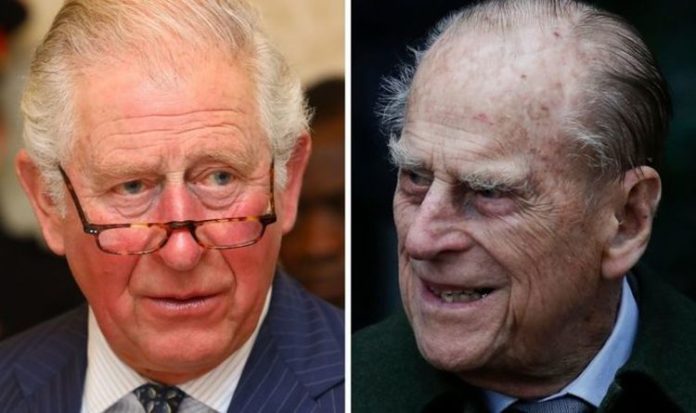 The Duke of Edinburgh is spending his ninth day in London’s King Edward VII hospital, as he is treated for an infection. According to Buckingham Palace, the 99-year-old is “comfortable and responding to treatment”, with the Duke’s youngest son, Prince Edward, explaining his father was feeling “a lot better”. Edward added Philip was “looking forward to getting out” and the family will “keep our fingers crossed” he can come back home soon.

So far only Charles has visited Philip in hospital, as coronavirus measures restrict the number of visitors allowed inside the premises.

He made the 200-mile round trip from his home in Highgrove, Gloucestershire, to see Philip, and an insider told the Telegraph Charles “simply wanted to go and see him” after he had spent longer than initially predicted in hospital.

It is believed Charles has been unable to see Philip – or his mother the Queen – since before Christmas, as the country continues to grapple with COVID-19.

Charles’ wish to see his father, therefore, appears to be a far cry from reports that he and Philip were not as close as some fathers and sons.

Royal commentator Tim Heald, explained how difficult their relationship had initially been, and the impact Philip’s own absence of parents could have had on his decisions in fatherhood.

Speaking on Amazon Prime’s 2016 documentary Prince Philip – A King Among Princes, he described the Duke as having an “odd upbringing and an odd childhood”.

He said: “He didn’t have any serious role models as far as parenting was concerned.

“This later came to be a bit of a handicap when it came to bringing up Prince Charles and the other royal children.”

For Penny Junor, author of the 1988 book Charles, Philip “simply didn’t get his son”, adding: “He had a very difficult relationship with Charles.

“They didn’t speak to each other as normal father and son.”

He said if Philip was your father “it must be difficult”, adding: “There’s no doubt his relationship with Prince Harry, Prince William, his grandsons, they find him helpful and caring – which is not the impression you get with his own sons.”

Mr Heald, who wrote 1991’s The Duke: Portrait of Prince Philip, also said the pair’s bond may have been damaged as a result of the breakdown in Charles’ marriage to Diana.

The author added: “Maybe he always found Prince Charles slightly exasperating, and the fact that he wasn’t able to make more of a go in his marriage to Princess Diana was at least as much his son’s fault as it was his daughter-in-laws.”

But more recently, their relationship appears to have blossomed, and Charles himself detailed how difficult it was not being able to see Philip, and the Queen, last year while he and wife Camilla, Duchess of Cornwall, isolated in Clarence House.

Just before Philip turned 99, Charles admitted he “hadn’t seen my father for a long time”, and that “doing FaceTime is all very well” but wasn’t the same as personal interactions.

He added to Sky News when asked about feeling disconnected from those closest to him: “Well it’s terribly sad, let alone one’s friends.

“But fortunately at least you can speak to them on telephones and occasionally do this sort of thing.

Prince Philip was visited by Prince Charles in hospital at the weekend (Image: GETTY)

“But it isn’t the same, is it? You really just want to give people a hug.”

In 2004, Philip did confess to having a different outlook to Charles, who he described as a “romantic” compared to his more “pragmatic” nature.

He added: “That means we do see things differently. And because I don’t see things as a romantic would, I am unfeeling.”