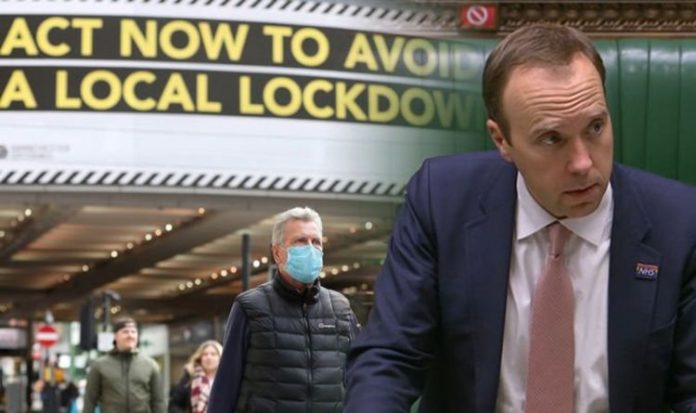 The Government has implemented a three tier system across England, with areas placed into one of three classifications depending on the severity of its coronavirus cases. Senior Government figures, including Prime Minister Boris Johnson want Greater Manchester to enter into Tier 3 – the strictest measures – but leaders from the area are kicking back.

Mr Johnson issued a stark warning in a press conference on Friday, warning he would not be afraid to impose the Tier 3 measures if an agreement could not be reached.

The spokesman said: ”If at all possible we do want to engage constructively with Greater Manchester and agree on a way forward.

However, if agreement cannot be reached the Government will need to intervene “in order to protect hospitals and save the lives of residents”.

Read More: Will Scotland go back into lockdown?

Addressing the Commons after an afternoon of talks between the Government and Greater Manchester, Health Secretary Matt Hancock issued a stark warning.

Speaking to MPs Mr Hancock said the over 60s are more likely to end up in hospital.

He told the Commons: “Cases continue to rise among the over-60s, who are the most likely to end up in hospital or worse.

Mr Hancock said the Government is “working hard” to secure a Tier 3 deal with Greater Manchester.

He said COVID-19 is “on the offensive” as winter draws in, telling the Commons: “Weekly deaths in Europe have increased by 33 percent and here in the UK deaths have tragically doubled in the last 12 days. The situation remains perilous.”

In this case, alcohol can only be served as part of a meal.

Travelling outside a Tier 3 area should be avoided, however residents can do so if it is for work, education or for caring for someone.

Tradespeople can enter homes and carry out work, and those in support bubbles can still see one another.

Areas in Tier 3 currently are