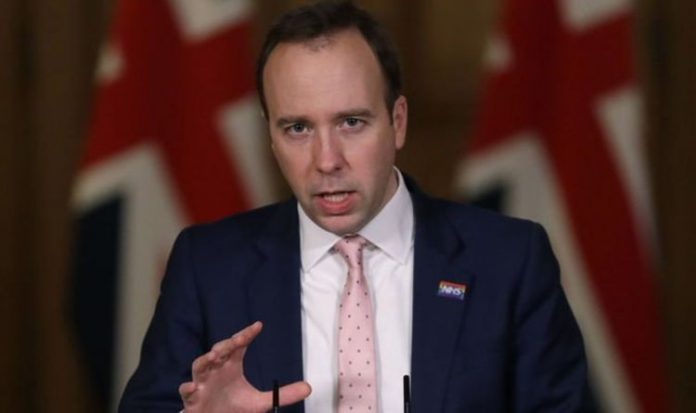 The Health Secretary has been forced to plunge more areas into lockdown as he warned another fast-spreading strain of the virus had been discovered. But he said the Oxford AstraZeneca vaccine was on the brink of being approved and hoped the vast majority of jabs could be given early next year. Mr Hancock told a Downing Street news conference: “I believe that everybody will do what is needed to keep themselves and others safe, especially this Christmas, and I know from the bottom of my heart that there are brighter skies ahead.”

He added: “Our vaccination programme started before people expected it to. We have made really good strides over the month of December so far.

“We will go as fast as we possibly can. This will be a big task for the NHS. What I would say in terms of the number of people vaccinated is that I think we will get there by the spring.”

Warning everyone to obey the draconian lockdown rules, he said: Ready to roll… Wrexham’s Wockhardt plant will produce the vaccine developed, right, by Oxford University “People should therefore hold on and really try to resist the temptation to do things that they shouldn’t and to see people that they don’t need to.

“I know that is tough and it is going to be a tough winter but the more people do that, the more quickly we are going to get through this together.”

Matt Hancock has been forced to plunge more areas into lockdown (Image: Getty)

The new vaccine is easier to distribute than the Pfizer/BioNTech, which must be kept at minus 70C. The Government has ordered 100 million doses of the Oxford vaccine, with around 40 million available by the end of March.

Mr Hancock said: “The reality is this vaccine programme is the way we are going to get through this because every time somebody is vaccinated, our country becomes a little bit safer, they become a little bit safer and we get a little bit closer to the life we all want to get back to.”

Yesterday leading virologist Professor Sir John Bell of Oxford University predicted the new “better than ever” vaccine could see the UK get back to relative normality by April.

He said: “I’m sticking to April. Ithink there will be a big push now after Christmas to get the vaccine out.”

Doctors’ surgeries and hospital hubs will administer the vast majority of shots in the coming months (Image: NC)

Prof Bell said of the Pfizer vaccine: “Surgeries are not really made for that kind of storage.

“The Pfizer vaccine is a good vaccine but it was always going to be hard to distribute with a cold chain like that.”

He expects the Oxford jab, which can be stored between 2C and 8C, to provide the bedrock of the UK’s vaccination programme and believes it could be approved between Christmas and New Year. Prof Bell said: “We have to wait, but I think we are nearly there.

“We are getting to be about prime time now. I would expect some news pretty shortly.” The expert warned, however, that just like the flu vaccine, even though the Covid ones would be able to deal with new virus strains, they may need to be tweaked from time to time.

Prof Bell said: “We don’t have to start heading for panic station yet. I think there’s some really simple experiments.

“The people who have made the vaccines have got stored in the fridge antibodies from the people who’ve responded to the vaccine so they can check to see whether they can neutralise these viruses.

“It takes a week or two to get that done but we should know pretty quickly whether it will havea material effect on the vaccines.”

The Oxford vaccine will be rolled out across the country as soon as it is approved. It will start its journey from a plant in Wrexham which is already on high alert and has employed 40 extra staff to cope with expected demand.

Professor John Bell predicts a new ‘better than ever’ vaccine could help the UK get back on track (Image: PA)

Doctors’ surgeries and hospital hubs will administer the vast majority of shots in the coming months. Larger venues such as sports stadiums, conference and leisure centres may then throw open their doors as vaccination centres, although their exact locations have yet to be decided.

They could include a variety of arenas like the Edinburgh International Conference Centre, Newcastle Centre for Life Science Park, Epsom Racecourse, Ashton Gate football stadium in

Bristol and Sandy Park rugby stadium in Exeter. Authorities are entering the final days before hopefully approving the Oxford vaccine, which is made in conjunction with AstraZeneca.

This means the first doses could be ready for transportation by as early as December 28. The roll-out of the vaccine is awaiting what is thought to be an any-moment-now green light from the Medicines and Healthcare products Regulatory Agency (MHRA).

The Wockhardt plant in Wrexham is ready to produce 150,000 vials of the vaccine a day, five days a week, as soon as the go-ahead is given.

A spokeswoman for the MHRA said yesterday: “Our rolling review of the Oxford/ AstraZeneca Covid-19 vaccine is ongoing. “Our process for approving vaccines is designed to make sure that any Covid-19 vaccine authorised meets the expected high standards of safety, quality and effectiveness. Any vaccine must undergo robust clinical trials in line with international standards, with oversight provided by the Medicines and Healthcare products Regulatory Agency.”

The spokeswoman added: “No vaccine would be authorised for supply in the UK unless the expected standards of safety, quality and efficacy are met.”