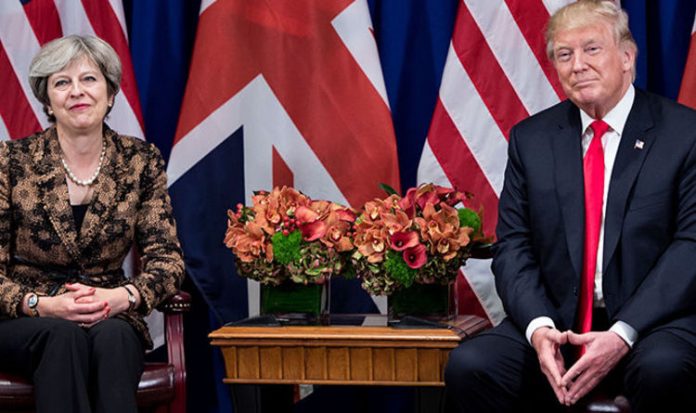 The Prime Minister has said the visit would be an opportunity to increase trade links and strengthen cooperation on security.

With Donald Trump due to touchdown in the UK today, Theresa May said: “As two nations – we are safer, more prosperous and more creative when we work together and I am looking forward to this week’s important discussions.”

The Prime Minister added that post-Brexit, “there will be no alliance more important in the years ahead”.

Ahead of the US President’s meeting with Russian counterpart Vladimir Putin in Helsinki on Monday, Mrs May has warned Mr Trump not to ignore the “malign behaviour” of Russia.

Before departing for his European trip, which included attending the immediately fractious NATO summit in Brussels on Wednesday, Mr Trump joked that his meeting with the Russian President “may be the easiest” part of it all.

Downing Street has welcomed the meeting in the Finnish capital but has also made clear that Mrs May expects her US counterpart to raise issues including the Salisbury nerve agent attack on former spy Sergei Scribal and his daughter Yulia.

The Prime Minister said: “Our long term objective remains a constructive relationship with Moscow. If we are to be successful in this we must keep engaging individually and as an alliance.

“That is why I welcome President Trump’s forthcoming meeting with President Putin – open channels of communication between the US and Russia are key to managing the risks of confrontation.”

Mrs May’s warning comes after a serious tirade at yesterday’s NATO summit in Brussels, where Mr Trump branded Germany a captive of Russia and demanded that NATO members double their minimum defence spending after claiming the US pays more than many other countries.

Along with trade and security risks, other key areas to be discussed between Mrs May and Mr Trump include Brexit and conflict in the Middle East.

Mr Trump is set to touch down at Stansted Airport at around 1pm to begin a two-day trip to the UK, which will see him meet both Mrs May and the Queen. He will then spend the weekend in Scotland.

But his visit could be marred by protests involving tens of thousands of people, with the Police Federation warning it will put “unquestionable pressure” on UK forces, who have been asked to send officers to assist the Metropolitan Police over the next two days.

Smaller demonstrations are scheduled to be held in several other areas of the UK, including Devon, Dundee, Edinburgh, Belfast, Norwich, Manchester, Leeds and Liverpool.

London Mayor Sadiq Khan has also given the green light for a giant inflatable figure depicting the US President as a baby to be flown over Westminster on Friday.