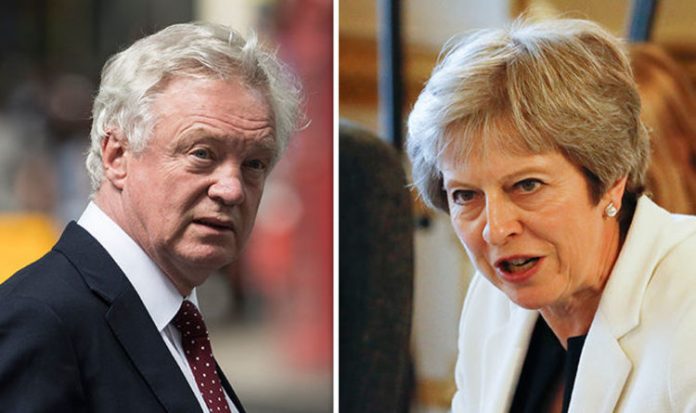 Staunch Brexiteers are trying to force the Prime Minister to release the white paper previously drawn up by the former Brexit Secretary before last week’s crunch Chequers meeting, which according to The Guardian, Downing Street ditched.

But political blog Conservative Home has now leaked, what is said to be former Brexit Secretary David Davis’ original plan on the morning Mrs May is releasing her official plan for the UK’s relationship with the EU post-Brexit.

The plan sets out something similar to a Canada-style trade deal, with elements added from other EU agreements.

The “compliance activity undertaken at a national level” includes features of Free Trade Agreements as well as licensing regimes, such as those used to move products with security implications.

To ensure that both parties comply with the relevant rules, the “mutual recognition of conformity assessment and inspection” would continue to be based on a “jointly agreed accreditation framework”.

The UK would have proposed a system that would have enabled authorities and businesses based in either the UK or the EU to conduct compliance activity for the UK and EU markets.

It adds “mutual recognition” of each others regulations and compliance activity takes advantage that the UK is “entirely aligned” with the EU from day one, and respects that “businesses with highly integrated supply chains and trade want to minimise the disruption they could experience upon exit”.

The plan made clear the EU has established a number of measures with other nations to make it easier to operate across different regulatory areas.

But it warns that mutual recognition of conformity alone would “not be enough for the EU-UK’s future relationship to not meet the principle of having only one relationship because it does approval in one country”.

It compares these to arrangements within the EU-Switzerland bilateral, which it said has a closer regulatory relationship for manufactured goods, resulting in increased market access.

The UK’s model, it said, would be supported by a “robust governance mechanism”, adding the UK has “always and will continue, to carry out a robust programme of risk-based market surveillance to ensure that products which are dangerous or potentially harmful to the environment to not reach consumers”.

This would include intercepting non-compliant products as they enter the UKL and imposing checks on products already on the market whilst exchanging information with market surveillance authorities in other member states.

The plan claimed this would protect users both in the EU and UK, meaning UK exports to the EU don’t pose a greater risk to EU consumers than they currently do.

Mr Davis, who resigned in protest over the plans laid out at Chequers last week, was reportedly furious when he saw the paper there as it was significantly different to the series of drafts his department has put together.

A source who had seen Mr Davis’ version told The Guardian: “You stick it all together, you get quite a good trade deal. We were turning Mansion House into hard text.”