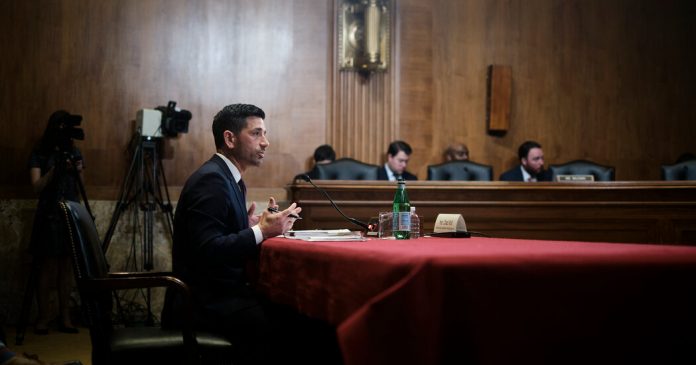 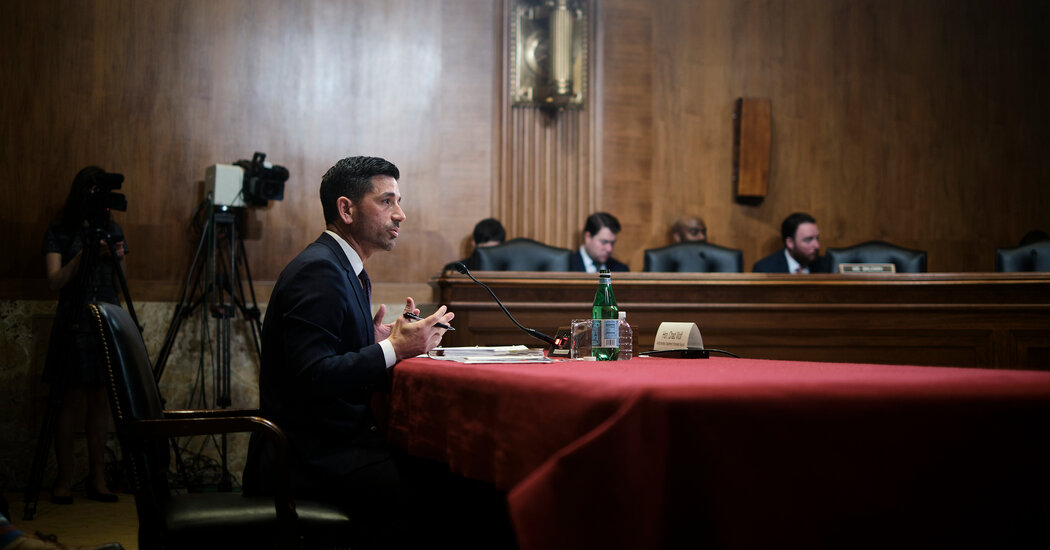 WASHINGTON — It took only 24 hours after President Trump attacked New York City in his State of the Union address for the president’s man at the Department of Homeland Security to act.

Chad F. Wolf had joined the department nearly two decades before as a midlevel staff member to help the sprawling new agency gear up to protect Americans after the Sept. 11, 2001, attacks. But in February, as the new acting secretary of homeland security, Mr. Wolf introduced himself to most in the United States by announcing on Fox News that New Yorkers were suspended from enrolling in expedited air traveler programs because their state had barred federal immigration enforcement agencies from gaining access to Department of Motor Vehicle records.

“It’s particularly interesting coming from New York again, from where 9/11 occurred,” Mr. Wolf said in a later appearance on the network. “We want to make sure we share information and not continue to withhold information.”

Only after thousands of New Yorkers were suspended from the programs did the department admit in court last month that what Mr. Wolf had said to justify his action was untrue. Several states and territories were not allowing the agency access to motor vehicle records, yet New York had been singled out because, Mr. Wolf had insisted, “New York is the only state, and I think that bears repeating, the only state that prohibits information sharing.”

That false statement came at a pivotal turn of Mr. Wolf’s long ascent at the department he now heads. His initial post at the federal government’s newly created Transportation Security Administration, within the Department of Homeland Security, was aimed at stopping terrorists from again exploiting the nation’s commercial aviation industry to kill Americans.

But as Mr. Trump has bent the department’s focus to match his own, Mr. Wolf has bent with it, including on travel bans, illegal immigration, domestic protests and the protection of federal property.

That shift has caused even some former Department of Homeland Security officials as well as members of Congress to question whether in their haste to create the agency, they neglected to include safeguards to prevent a campaigning president and a compliant homeland security chief from using the department’s arsenal to fulfill their political ambitions.

“The idea of having a Department of Homeland Security wasn’t inherently bad, but the way it was done was shoddy, and now we are paying the price,” said Russell D. Feingold, a former Democratic senator who opposed the creation of the department in 2002.

At the time, Congress believed broadly that a single department was needed to improve communication between national security agencies and state and local governments to prevent another terrorist attack, and it set out to enact the largest reorganization of the federal government since the Truman administration restructured the military in 1947.

The department would employ about 170,000 workers across 22 agencies, including the Coast Guard, the Secret Service, federal immigration agencies and the Federal Emergency Management Agency, as well as a new intelligence division to analyze criminal threats. The political fight over its creation was not over the concentration of resources in the hands of one cabinet secretary but over Republican demands that new federal employees should not be in a union.

“That was the whole notion, that we would have a way to protect our citizens if there was a terror attack,” said Barbara Boxer, a former Democratic senator who voted for the department’s creation and now says she regrets it. “Somehow, this has developed into the president’s private military.”

The Trump administration has defended a deployment of tactical teams to Portland, Ore., and the officers’ aggressive tactics by citing a federal statute bolstered by the law that created the Department of Homeland Security. That statute allows the secretary to deputize agents within the department’s various agencies to protect federal property, like the courthouse in Portland.

Ms. Boxer took the point. “I view it as a real wake-up call to analyze all of our laws to see if they could be abused to the point that could really injure our own people,” she said.

Alexei Woltornist, a spokesman for the department, rejected that it was “punishing cities led by Democrats.”

“The mission of D.H.S. changes as the threats change,” he said, noting that the agency has focused on carrying out Mr. Trump’s immigration policies. “When violent rioting began to emerge throughout the country, again the threat changed and the department responded.”

Judd Gregg, a former Republican senator and a sponsor of the act, defended the department’s actions against “a disruption of the orderly society,” even as he acknowledged that Congress paid little attention to the decision in the Homeland Security Act to transfer authority to protect federal property from the low-key General Services Administration to the more political homeland security secretary.

“I don’t think it was focused on at all,” he said, adding, “we were looking at the much bigger issue of how terrorists would attack us next.”

The Department of Homeland Security has struggled with its identity since its creation. James M. Loy, the first head of the Transportation Security Administration, recalled that “it was a patchwork quilt kind of thing.”

“Here we are 18 years later,” he added, “the department is still maturing in how it carries out its missions.”

Mr. Wolf, a Plano, Texas, native, went to college on a tennis scholarship before heading to Washington to work on Capitol Hill, then at the T.S.A. He rose at the agency to assistant administrator until 2005, when Thomas Blank, one of his mentors at the aviation security agency, recruited him to Wexler & Walker, a now defunct lobbyist firm.

Mr. Wolf spent the Obama administration lobbying, including for a new carry-on luggage screening device that would cost the T.S.A. hundreds of millions of dollars. He returned to the agency as chief of staff in 2017 as it tested the product — it is now used at most airports.

After Kirstjen Nielsen became homeland security secretary in December 2017, she tapped Mr. Wolf to be her chief of staff.

The agency has been at the center of convulsive policies that banned travel from predominantly Muslim countries, transferred money from the Defense Department to build a border wall and restricted the ability of migrants to obtain asylum at the southwestern border. Mr. Wolf was also crucial to carrying out a policy that led to the separation of more than 2,800 migrant children from their parents in 2018.

When he testified in June 2019 to be confirmed as the department’s under secretary for strategy, policy and plans, Mr. Wolf said he learned of the family separations policy late, just before the attorney general at the time, Jeff Sessions, announced it. Emails obtained by Senator Jeff Merkley, Democrat of Oregon, showed that Mr. Wolf actually included the separation of families in a list of policy recommendations that he sent to the Justice Department in December 2017.

Mr. Woltornist said that Mr. Wolf was not directly involved in the policymaking and that there were dozens of proposals circulating between the Departments of Justice and Homeland Security.

Before he was made acting secretary, Mr. Wolf was more of a behind-the-scenes operator than a public defender of Mr. Trump. In September 2019, Mr. Wolf refused to go on Fox News to speak on the department’s efforts to crack down on terrorism because the host might ask about the administration’s immigration agenda, according to a former administration official.

After the White House purged the department’s leadership last spring, it began to install others who had proved more willing to defend Mr. Trump’s immigration policies on television, all of them in an acting capacity to avoid the Senate confirmation process. Mr. Wolf adjusted accordingly.

Senate-confirmed officials “have a certain ability to push back a little bit in a firm and polite way,” Mr. Chertoff said. Now at the department, he said, the leadership “will basically never be nominated.”

“The message they are getting is, ‘You are here on severance,’” he added.

Mr. Wolf is stepping into the spotlight in ways his predecessors would not, including by now being a frequent visitor of the conservative television shows that Mr. Trump follows.

He has even embraced the hard-liner image that the president values. Before Mr. Wolf agreed last week to pull tactical teams out of Portland and allow the state police to handle the protests, he flew to the city and stood for photographs alongside officers in front of graffiti-laced walls at the federal courthouse — even as officials in the department addressed a memo to him warning that the tactical teams did not have the proper training to quell the protests.

Ms. Nielsen, rather, was often admonished by Mr. Trump for focusing on department responsibilities like cybersecurity, instead of on illegal border crossings. Kevin K. McAleenan, her successor, complained about the anti-immigrant messaging and confrontational tone of Kenneth T. Cuccinelli II, the acting deputy secretary, and Mark Morgan, the acting commissioner of Customs and Border Protection.

“Chad Wolf works much better with these individuals,” Brandon Judd, the president of the National Border Patrol Council and a close ally of Mr. Trump’s, said this year.

Mr. Cuomo said repeatedly at the time that federal officials could get the criminal histories they were looking for from existing F.B.I. databases and that the administration was really after data on undocumented immigrants.

“They didn’t even have a patina of credibility in what they did,” Mr. Cuomo said in an interview after the release of the court documents that showed that Department of Homeland Security leaders had made false statements.

“My sense is they’re so aggressive in their politics that there’s not even a specific target,” he said, adding, “It’s just a generalized blast of disagreements.”

Since the Global Entry suspension in February, Mr. Wolf has stood with Mr. Trump to mark 200 miles of completed border wall and has echoed the president’s critique of protesters that targeted statues and monuments. In recent weeks, Mr. Wolf has emerged as the face of the administration’s intervention in cities like Portland.

“I don’t need invitations by state mayors or state governors to do our job,” Mr. Wolf said last month on Fox News. “We’re going to do that whether they like us there or not.”

The original point of the department — to break down the barriers between federal, state and local law enforcement — has taken on new meaning.