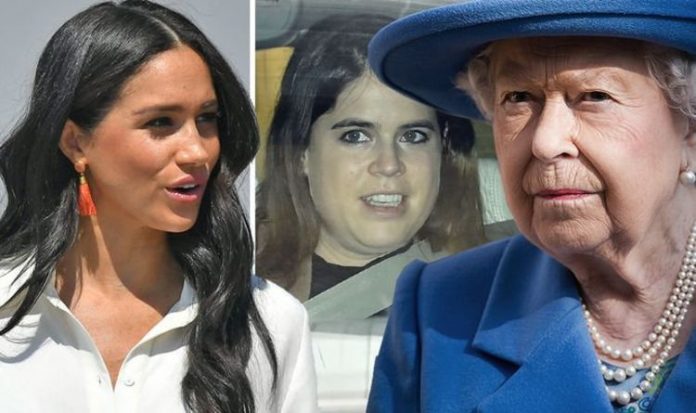 Buckingham Palace announced on Friday afternoon that the Queen had removed royal patronages and military appointments after the Duke and Duchess said they had no intention of returning as working members of The Firm. Harry has been forced to relinquish a number of high-profile positions, including as General of the Royal Marines.

Meanwhile, Meghan has been removed as patron of the Royal National Theatre and as vice-president of The Queen’s Commonwealth Trust.

The outcome of the so-called Megxit review, does mean Harry can keep his links to a number of organisations, including the Invictus Games, the Rhino Conservation Botswana charity and WellChild.

The Duchess has also maintained her affiliation to Smart Works and animal charity Mayhew.

The royal expert says Meghan and Harry will be treated in the same way as other non-working royals, such as Princess Eugenie and Princess Beatrice, and points out this change should not be deemed as a “punishment”.

“The Queen has been giving a small selection of her patronages to other members of the Royal Family, and she believed Meghan would have been perfect as Patron.”

She added: “They chose to leave their jobs as senior royals.

“It makes perfect sense to have the official patronages and service appointments removed because they no longer represent the Queen. Personal patronages are different.

“Princesses Beatrice and Eugenie and Prince and Princess Michael of Kent, none of whom are working royals, have personal patronages and represent these patronages.

“This will also now apply to Harry and Meghan. It is not a punishment.

“Harry and Meghan have moved to the US and are focusing on their careers here.”

It said: “The Duke and Duchess of Sussex have confirmed to Her Majesty The Queen that they will not be returning as working members of The Royal Family.

A spokesperson for Harry and Meghan said: “As evidenced by their work over the past year, the Duke and Duchess of Sussex remain committed to their duty and service to the UK and around the world, and have offered their continued support to the organisations they have represented regardless of official role.