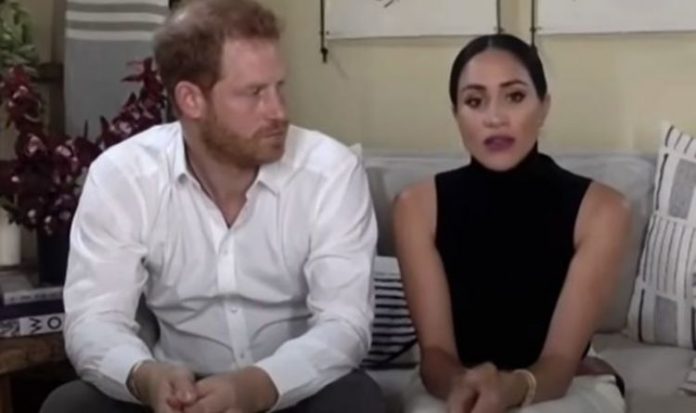 Meghan Markle and Prince Harry can go ahead with their projects “guns blazing” because they feel “they don’t really have much to lose”, a royal commentator has claimed. This comes after the Duke of Sussex sat down for an interview with progressive business magazine, Fast Company, about the necessity for social media reform. HeirPod host and ABC royal contributor Omid Scobie broke down what this could mean in practical efforts for the couple as they move past the Royal Family.

He told listeners: “They have the power to have big conversations with big leaders in Silicon Valley.

“They’re that big enough of celebrities and are speaking out about this platform.

“I assume that a lot of Silicon Valley leaders might be pretty interested in speaking to them.

“We have to remember that Harry and Meghan publicly supported the ‘Stop Hate for Profit’ movement.”

Mr Scobie continued: “They themselves said that they were not afraid to pick up the phone and actually speak with those working at these platforms and social media organisations.

“So I think they’re really kind of putting themselves on the line here.

“They probably feel that they don’t really have much to lose.”

The Duke referenced the US Capitol riots and branded it a “literal attack on democracy”.

He also addressed the rumour that he and Meghan had quit social media for good.

Harry told Fast Company: “It’s funny you should ask because ironically, we woke up one morning a couple of weeks ago to hear that a Rupert Murdoch newspaper said we were evidently quitting social media. That was ‘news’ to us, bearing in mind we have no social media to quit, nor have we for the past 10 months.

“We will revisit social media when it feels right for us—perhaps when we see more meaningful commitments to change or reform—but right now we’ve thrown much of our energy into learning about this space and how we can help.”