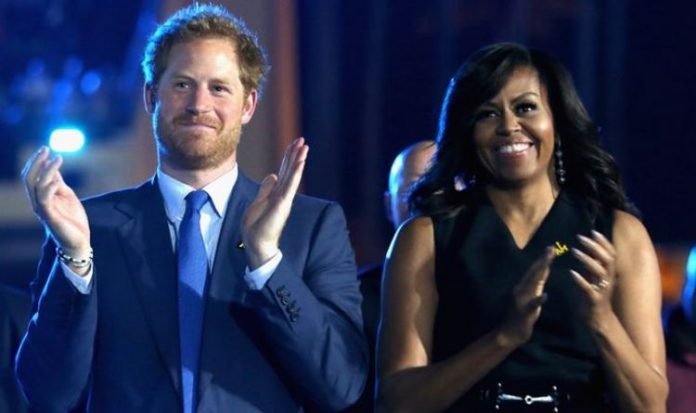 Meghan Markle and Prince Harry are “following in the footsteps of the Obamas” with their newly announced podcast, according to ITV LA correspondent Ross King. He spoke to Lorraine about the Duke and Duchess of Sussex’s plans to create audio content for Spotify. Mr King compared the multi-year deal to the one struck with former US President Barack Obama and First Lady Michelle Obama.

He told viewers: “Meghan and Prince Harry have yet another new business venture.

“Wouldn’t it be great if it was that they are going to host ‘This Morning’ on a Friday?

“But, no, they’ve done a big deal with Spotify.

“This is following in the footsteps of the Obamas.”

Mr King continued: “They’re going to produce and host their own show, starting with a Holiday Special.

“It’s going to be released this month, with the full series coming out next year.

“They’ve got their newly formed Archewell Audio programming, which, of course, is after little Archie.

“What they want to do is uplift and entertain audiences around the world, and feature diverse perspectives and voices.”

In September, the Duke and Duchess of Sussex confirmed that they had secured a multi-year deal with the US streaming giant.

They plan to produce and possibly star in documentaries, feature films and children’s programmes.

Mr and Mrs Obama have used a very similar model to produce content for Netflix.

The Sussexes have also signed with the same public speaking agency as the Obamas.