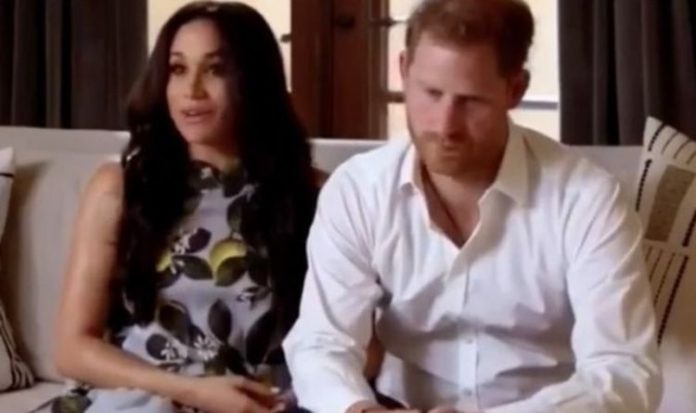 The Duke and Duchess of Sussex briefly featured in a promotional Spotify video on Monday after striking a lucrative podcast deal with the audio streaming service last year. But conservative commentator Darren Grimes took to Twitter to mock Meghan and Harry over their first appearance since Megxit was confirmed to be permanent.

Mr Grimes said: “Prince Harry finishing Meghan’s sentence with ‘that inspire, challenge and educate’, as part of their new podcast promotion, will be enough to put you off your breakfast!”

In the Spotify Stream On video, Meghan and Harry are sat on a sofa together at their California mansion.

Meghan adds: “We created Archewell Audio to make sure that we can elevate voices that maybe aren’t being heard, and hear people’s stories.”

Harry then says: “And the biggest part of this is trying to create this community of where you can share.

“We encourage everybody else to then share their own vulnerabilities within that safe space.”

The video comes after it was confirmed last Friday that the ex-Suits star and the Queen’s grandson will not be returning to royal duties.

As well as Spotify, they have signed a lucrative deal with streaming giant Netflix rumoured to be worth more than £150million.

In response to losing their patronages, Meghan and Harry hit back by saying: “We can all live a life of service. Service is universal.”

Their statement has been widely criticised as being disrespectful to the Queen.

In the wake of Megxit, the couple are to give a televised interview to US chat show host Oprah Winfrey.

The Royal Family is likely to be bracing for the programme which airs on CBS on March 7.

But nearly half of the British public believe Harry should be removed from the line of succession, according to a new poll.

He remains sixth in line to the throne despite quitting as a working royal.

The survey of 4,203 adults, which was carried out by YouGov on Monday, found 49 percent of those questioned felt the 36-year-old should be taken out of the succession line.