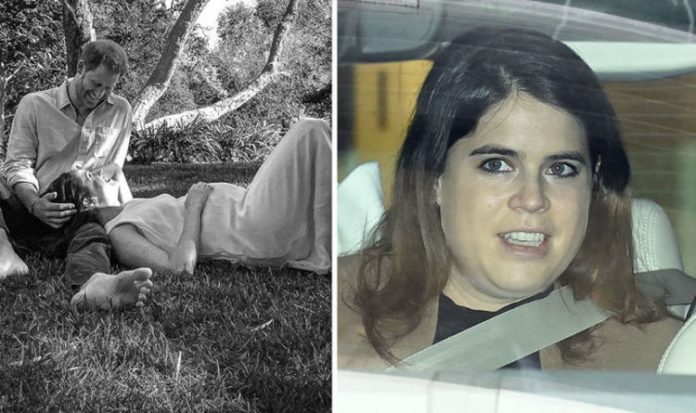 Meghan and Harry, 39 and 36, have today confirmed that the Duchess of Sussex is expecting her second child. A spokesman for the couple said: “We can confirm that Archie is going to be a big brother. “The Duke and Duchess of Sussex are overjoyed to be expecting their second child.” The news comes just days after Princess Eugenie gave birth. A royal statement on Tuesday confirmed the happy news of Eugenie and Jack Brooksbank’s first-born son. And royal watchers on social media have been quick to point out that this is not the first time the Sussexes have “overshadowed” the couple.

One wrote: “Congratulations to them but a little odd that, again, the Sussexes’ baby news overshadows Princess Eugenie ‒ first her wedding, now her first baby.”

While a third simply wrote: “Of course. Just after Eugenie’s news.”

The Sussexes reportedly sparked a royal row when the couple announced Meghan was pregnant with Archie as Eugenie and Jack got married in October 2018.

Royal authors Omid Scobie and Carolyn Durand claim the decision “did not go down particularly well” with Eugenie.

Sarah Ferguson and Prince Andrew’s daughter was even said to “disappear” at her own wedding after Meghan and Harry “put her nose out of joint”.

Sarah was reportedly furious with the move.

When Kensington Palace announced that Meghan and Harry were expecting a child, Sarah quickly posted a series of tweets congratulating her daughter and Jack on their wedding day.

It was a move perceived by many as a swipe at the Duke and Duchess of Sussex.

Despite this, a source close to the Royal Family told the Daily Mirror that Eugenie and Jack were “thrilled for them both”.

And regarding the timing of their announcement, a royal aide insisted: “Harry and Meghan would never dream of stealing Eugenie and Jack’s thunder.”

The senior source added: “Everyone is hugely excited about the news.

“The whole family are very happy they were all able to congratulate the couple in person before they left for their first major overseas tour.”

In ‘Royals at War’, Dylan Howard and Andy Tillett claimed the announcement outraged some members of the Royal Family.

They wrote: “Meghan put her foot in it when she decided that [Eugenie’s wedding day] would be the ideal moment to announce that she and Harry were expecting their first child.

“This was a huge social gaffe, even if you were not a royal ‒ stealing the limelight from Eugenie, who was furious, as was her mother, Sarah.”

Harry was reportedly “embarrassed”, knowing the timing would upset his cousin.

They also chose an awkward moment to publicly announce the news.

Buckingham Palace officially announced the happy news at the very start of Meghan and Harry’s tour of Australia, New Zealand, Tonga and Fiji.

This was also Sarah’s 59th birthday.

Eugenie and Harry are said to have a particularly strong relationship, though.

In the sympathetic biography Finding Freedom, authors Mr Scobie and Ms Durand detail how the cousins are “the closest of friends”.

Eugenie “welcomed Meghan enthusiastically” when she and Harry went public with their relationship.

The Princess was one of the first to find out about the romance, having “told friends she loved Meghan”, adding that she was “just the tonic” for Harry.

And late last year it emerged that Eugenie and Jack would be staying in Harry and Meghan’s Frogmore Cottage.

As they left hospital on Friday, Jack reportedly drove Eugenie to Frogmore with their newborn son.

The home is close to Royal Lodge, where Sarah and Andrew live.

‘Royals at War’ by Dyan Howard and Andy Tillett was published in June 2020 by Skyhorse Publishing, and the Kindle edition is available to buy here.

Finding Freedom was written by Omid Scobie and Carolyn Durand and was published by HarperCollins in 2020. It is available here.