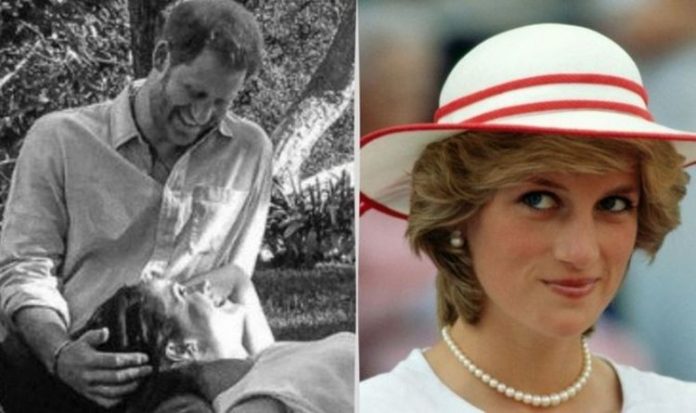 The Duke and Duchess of Sussex revealed they are expecting their second child exactly 37 years after Diana told the world she was pregnant for the second time. On February 14, 1984 the Daily Express carried a front page story titled “Valentine’s Day joy for Charles and Diana. Smile that says it all.”

Seven months after the news broke, the Princess of Wales gave birth to her second son at St Mary’s Hospital in Paddington.

Royal fans were quick to praise the couple’s timing of the announcement.

One woman said the pair’s sweet nod to Diana made her “emotional” while another said: “Princess Diana would have loved Meghan!”

Another said: “Now I am crying.”

Others praised the duke for finding ways to include his late mother in his life’s biggest milestones.

He said he chose the stones “to make sure that she’s with us on this crazy journey together”.

Meghan said “it’s so important to me to know that she’s a part of this with us” as he praised the “beautiful” ring.

She also revealed how getting to know Diana’s sisters had helped her “in some way know a part of her through them” and also through Harry.

The Sussexes released a black and white photo of themselves lounging in a garden with Meghan cradling her baby bump.

Photographer Misan Harriman tweeted: “Meg, I was there at your wedding to witness this love story begin, and my friend, I am honoured to capture it grow.

“Congratulations to the Duke and Duchess of Sussex on this joyous news!”

Meghan and Harry will celebrate their third wedding anniversary in May.

Their first child Archie will also celebrate his second birthday the same month.

She revealed that as she cradled little Archie in her arms she was hit by a “sharp cramp” and fell to the floor.

She wrote: “I knew, as I clutched my firstborn child, that I was losing my second.”