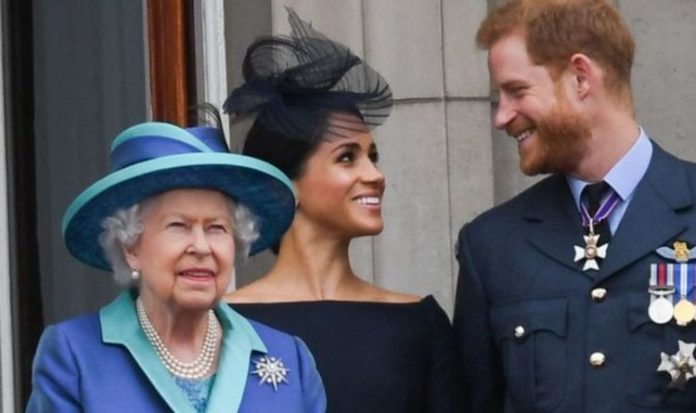 Meghan and Prince Harry shocked the Royal Family when they announced in January their intention to “carve out a new progressive role” for themselves within the institution. Two months later, the couple officially stepped down as senior royals, relinquishing their rights to carry out royal duties, use their HRH styles or their Sussex Royal brand.

This move, which has been dubbed Megxit by commentators and the public, surely had an impact on the monarchy and the Queen herself.

However, royal expert Richard Fitzwilliams believes Her Majesty won’t feature the Duke and Duchess of Sussex’s groundbreaking choice in her Christmas Day speech.

He told Express.co.uk: “I doubt this year there will be much about her family – and Harry and Meghan’s stepping down as senior working royals in January is unlikely to feature.”

Every year the Queen records a message to be broadcasted at 3pm on Christmas Day.

Meghan Markle and Prince Harry’s Megxit is unlikely to be included in the Queen’s Christmas speech – expert (Image: GETTY)

This speech is in her own words and gives the chance to the monarch to speak directly to the nation.

Mr Fitzwilliams noted the Queen usually highlights family events that have happened during the year.

However, given the exceptionality of 2020, the monarch is more likely to focus her speech on the difficulties presented by the pandemic to the country as a whole as well as expressing hope for the future now that a vaccine against coronavirus has been rolled out, the expert said.

The Queen did not include a portrait of the Sussexes on her desk while delivering her Christmas Day speech (Image: GETTY)

He explained: “Given the seriousness of the pandemic which has gripped the whole country since March, I think that this year the Queen is likely to deal with some of its effects and particularly, since optimism is so important during what will be a difficult festive season for many, the future that beckons since we now have vaccines.”

“Her messages to the nation about the pandemic and on the 75th anniversary of VE Day, which she may refer to, were morale boosters in a truly grim year.”

The Queen has already delivered two speeches this year – on April 4 and on May 8.

The first focused entirely on the coronavirus crisis, with the Queen urging Britons to push through difficulties knowing the whole world was fighting against the same virus.

In the second, delivered to mark the 75th anniversary of VE Day while the first national lockdown was still in place, the Queen opened up on her memories of the remarkable day, when the end of World War 2 on the European front was announced.

During last year’s Christmas Day speech, the Queen acknowledged 2019 had been a “quite bumpy” year.

Her remarks came after 12 months of intense political debate over Brexit as well as a series of events affecting her family – including Prince Philip’s car crash, the Sussexes voicing their hardship at the end of their tour to South Africa and Prince Andrew’s Newsnight interview.

Last Christmas, the Queen was said to have snubbed Meghan and Harry for not including a portrait of the young family-of-three on her desk.

Pictures of Prince Charles and Camilla, the Cambridges, Prince Philip and King George VI had been included.

However, one royal expert said rather than snubbing any beloved member of her family, the Queen may have simply wanted to highlight the line of succession to the throne.

Meghan Markle and the Queen during their joint engagement in 2018 (Image: GETTY)

Speaking to BBC News, royal expert Anna Whitelock said: “You could read into that that, simply, she is focused on her father and then the direct heirs to the throne.”

She added: “But certainly yes, people will read into that something.

“The Queen, of course, holds Prince Harry in great affection, she’s an adoring grandmother and he’s very close to her.

“But there’s no doubt that the Duke and Duchess have attempted to forge their own path this year.”