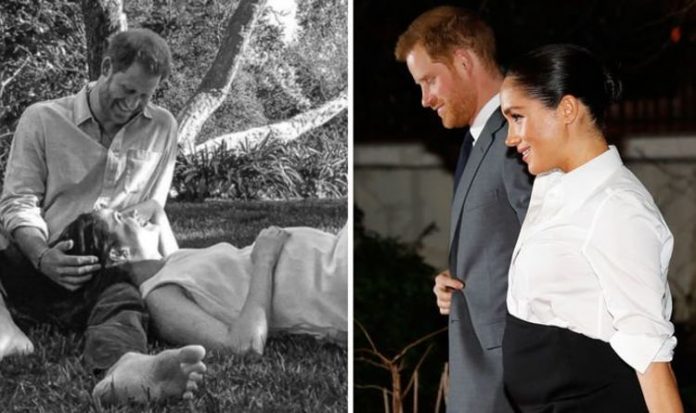 The Duke and Duchess of Sussex announced Archie was going to be “a big brother” on Sunday, as they declared Meghan was pregnant with their second child. As Harry is sixth-in-line to the throne, Archie follows him at seventh-in-line while the Prince’s second child will slot in at eighth. However, until 2013, the Duke of Sussex’s place in the line of succession could have been in jeopardy.

His wife Meghan attended an all-girls Catholic school in LA, which prompted speculation she may have been baptised as a Catholic.

The Royal Family’s official website explained: “A person is not disqualified from succeeding to the Crown or from possessing it as a result of marrying a person of the Romance Catholic faith.”

Journalist Kate Samuelson also noted in TIME magazine a month before the Sussexes’ wedding the legislation change passed into law at a convenient time for the couple.

She said: “This is lucky for Prince Harry, as his fiancee, the American actress and philanthropist Meghan Markle, was raised as a Catholic.”

Previous royal couples have suffered under the Act of Settlement’s rules.

The Queen’s first cousin, Prince Michael of Kent, was 15th-in-line to the throne when he decided to marry practising Catholic Baroness Marie Christine von Reinnitz in 1977.

He was removed from the line of succession as a result, but reinstated in 2015 when the new legislation came into effect.

Even so, the new rules mean that, while an heir to the throne can marry a Catholic, their offspring have to be raised in the Church of England.

Meghan and Harry’s children therefore have to be raised as Protestants regardless of the legislation change.

Even so, the new legislation means the Sussexes’ children will be free to marry Catholics if they so wish.

It is worth noting Meghan also took surprising steps to remove herself from her Catholic past in the run-up to her wedding.

The Daily Mail claimed: “Miss Markle did not need to become an Anglican in order to marry Harry in church, but at the time of their engagement last November, she made clear she had chosen to be baptised and confirmed out of respect for the Queen’s role as the head of the Church of England.”

The baptism was in no way obligatory — and The Washington Post examined the two most likely possibilities for her decision to be baptised.

Journalist Julie Zauzmer explained: “One, that while Markle’s parents — both of whom are Protestant — raised her as a Protestant Christian and sent her to Catholic school, they simply never baptised her, and this is Markle’s first baptism.

“Two, that she had a baptism that the Church of England won’t accept.”

However, the Duchess told Vanity Fair she came from a home which practised Protestant values before she married, even though her parents chose to send her to the private Catholic day school, Immaculate Heart.