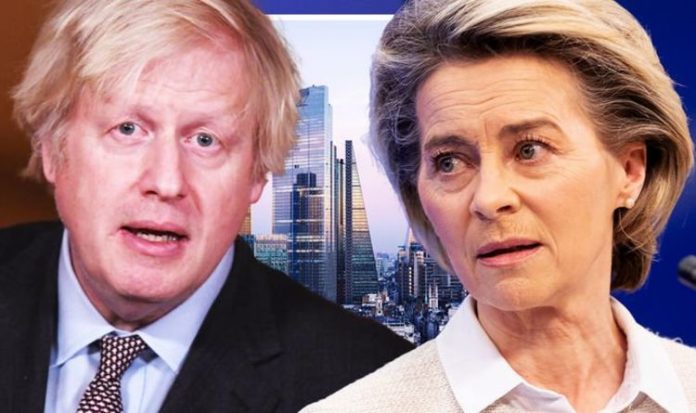 In January, Amsterdam overtook London as Europe’s largest share trading centre. An average €9.2billion (£8.07bn) shares a day were traded on Euronext Amsterdam and the Dutch arms of CBOE Europe and Turquoise in January, a more than fourfold increase from December. The surge came as volumes in London fell sharply to €8.6billion (£7.5bn), removing the UK from its historic position as the main centre for the European market, according to data from CBOE Europe.

The shift is a direct consequence of a ban on EU-based financial institutions trading in London because Brussels has not recognised UK exchanges and trading venues as having the same supervisory status as its own.

Without the so-called equivalence to ease cross-border dealing, there was an immediate shift of €6.5billion (£5.7bn) of deals to the EU when the Brexit transition period came to an end on January 1.

However, William Wright, founder of think tank New Financial, has warned the Netherlands not to get too excited about overtaking London, as trading volumes in the City are still five times larger than the whole of the EU combined.

He wrote: “This shift is one of the very areas where Brexit has a binary/mechanical impact: inside the EU, trading in EU shares could take place in London; outside the EU with no equivalence for stock exchanges, it can’t. So it had to move and has moved.

“The numbers look big but the economic impact (at least for now) is limited. Back of the envelope estimate: €6.5billion (£5.7bn) in daily trading volumes in EU equity trading switching from London translates into maybe £50million (€57m) in annual revenues, max £5million (€5.7m) in lost tax. Probably less.”

Despite admitting that the trade deal struck with the EU on Christmas Eve failed to meet his ambitions on financial services, Prime Minister Boris Johnson has always dismissed the warnings European financial hubs could steal away the City of London’s supremacy.

In 2018, Mr Johnson was hailing London’s financial sector during a speech at the UK-Africa Investment Summit when he took the swipe at Angela Merkel, the German Chancellor.

The Prime Minister said: “One tube stop away and you’ll be in Canary Wharf where, along with its older siblings in the City, trillions of pounds in capital are being raised for every venture you can think of, from French construction to African telecoms to American cancer-curing drugs.

“It may give you some idea of the scale of the financial services in London when I say Canary Wharf alone is a bigger banking centre than the whole of Frankfurt.

“We have the tech, tech of all kinds and we have, by far, the biggest tech sector anywhere in this hemisphere.”

Last month Chancellor of the Exchequer Rishi Sunak hailed the potential for a “Big Bang 2.0” in the City after Brexit as he hinted that the Government is ready to slash red tape.

The Chancellor raised the prospect of a Margaret Thatcher-style surge for the City.

He stressed that while equivalence and other elements were important, his main focus would be to make sure the Square Mile “remains the most dynamic place to do financial services anywhere in the world”.

In an interview with City AM, Mr Sunak said “there are many things in the deal that are good for financial services”.

Referring to Brexit enthusiasts who claim the City can now enjoy another Nineties’ style leap forward, Mr Sunak said they “make a really, really good point”, adding that people were free to “call it Big Bang 2.0 or whatever”.

He added: “If you look at the history of the City stretching even further back than that, it has always constantly innovated, adapted and evolved to changing circumstances and thrived and prospered as a result. And I think it will continue to do that.”

Mr Sunak said the Treasury would “play a role in that, and all the businesses and the people involved will help us do that”.

However, the Chancellor also played down the need for fundamental change in the City, pointing to its natural advantages and the “culture and creativity of our people”.

He noted: “Regulation is important, of course, as is timezone, as is language. All of those things are important.”