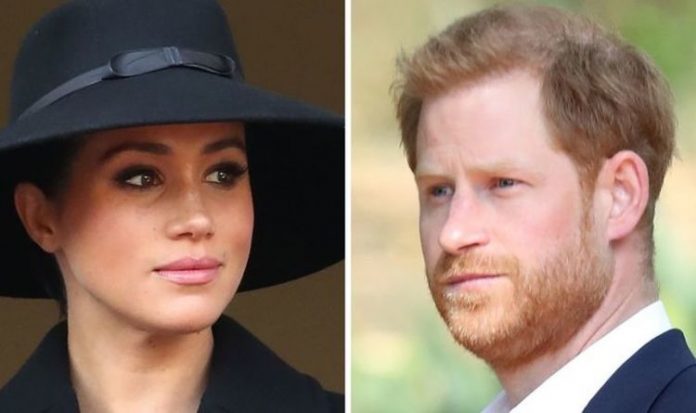 The Duke and Duchess of Sussex have been embroiled in a raging dispute over their one-year-old’s birth certificate, after it emerged Meghan’s name was wiped off the documentation. Her first names, Rachel Meghan, were removed from the certificate weeks after it was originally registered two years ago, and currently now reads Her Royal Highness The Duchess of Sussex. It sparked a furious backlash from commentators who demanded to know why the couple were able to keep using their royal titles, despite opting to remove themselves from senior Windsor life last year.

Meghan claimed Buckingham Palace had “dictated” that her name be removed, yet her comments have reportedly left an already tense relationship with the Royal Family even more strained.

It wasn’t the first time the couple came under fire as a result of Archie’s birth, as insiders and the public lashed out after the Sussexes “took a celebrity attitude” towards their son’s unveiling.

Ashley Pearson, a royal correspondent, discussed how there was a “fundamental disconnect” in the Sussexes’ attitude, and how different it is “being a celebrity and being a royal”.

Speaking on Amazon Prime’s 2020 documentary Harry & Meghan: The Next Step, Ms Pearson noted that “when you are a celebrity you are entitled to privacy”, but this was not the case when a member of the Royal Family.

The couple kept many details regarding the pregnancy secret, with insiders initially believing Meghan gave birth at Frogmore Cottage – the couple’s home – before reports emerged she had been whisked off to hospital instead.

They opted to veto the normal royal tradition of having their picture taken with the newborn outside the hospital, and it took days before official photographs were released.

Even Archie’s name was kept hidden before it revealed after the birth announcement.

She continued: “If the people want to see the new mum, just hours after she gives birth, trotted out in stockings and high heels, then you do it. That has been done up until now.

“Whether or not that is right, that is the precedent.

“So for Harry and Meghan to treat this the way a celebrity would really treat this, which is, ‘We ask for privacy at this time’, that is not what royals do.

“And the British press and some of the public have been upset because they want to feel like they are participants in this birth, in the way they have in other royal births. However, Meghan and Harry have drawn a clear line in the sand, and said, ‘No’.”

Images showing the members of the Royal Family meeting the newborn soon emerged, and Meghan and Harry would later meet with the press to have photographs taken.

At the time, Meghan described the feeling of presenting their son to world as “magic… it’s pretty amazing”.

On Archie, Meghan said he had “the sweetest temperament and is really calm”, before Harry joked that he “didn’t know who he gets that from”.

The ongoing saga over Meghan and Harry and their split from the Royal Family sparked controversy across the world, when they announced their intentions to quit last year.

A summit had been planned to be held between the Sussexes and the Queen one year on from Megxit, the term coined to describe their exit, but as a result of the coronavirus pandemic this has been postponed.

At the time, Robert Hardman – a royal author – demanded the couple be reminded that they “can’t be half-royal”, as insiders on both the Sussexes’ and Buckingham Palace’s sides thrashed out a deal to conclude Megxit.

Mr Hardman said that the couple were “clearly very unhappy with their royal existence” and that “people will have sympathy” for them wanting to leave.

He said: “The crux of the matter is you can’t be half-royal – you can be part of the royal machine, you can accept the privileges that go with it but also take the restrictions.”

Mr Hardman argued that Harry and Meghan could “go down the route” taken by the likes of the Duke of Kent, who retains his privacy but carries out royal duties, yet added: “What you can’t do is to be a sort of Trans-Atlantic royal who drops in, does a bit of royal stuff, but then goes off to do this sort of financial independence stuff in LA or Toronto or wherever it is.”

This argument was cemented by Graham Smith, the chief executive officer of Republic – a group advocating the replacement of the monarchy.

He demanded that if the couple want to live privately “they have to renounce their titles”, while ensuring they no longer claim public funding.