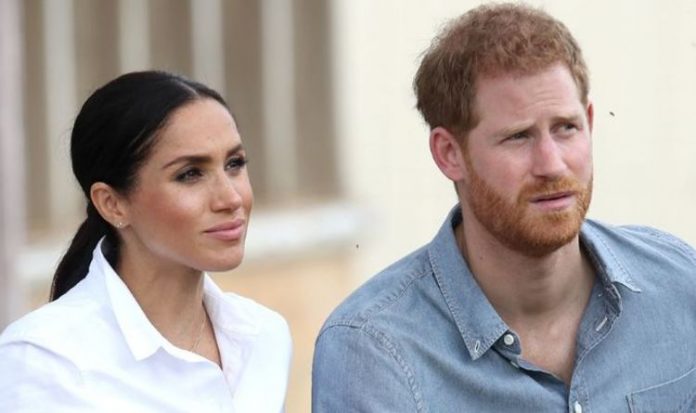 Some 46 percent of respondents to a YouGov poll said it is inappropriate for the Duke and Duchess of Sussex to sit down with the US chat show host. Just 29 percent thought it was appropriate and 25 percent did not know.

The poll comes after it was announced Meghan and Harry – who have quit royal duties for a new life in America – will open up to Oprah, who attended their royal wedding.

The bombshell interview will air on US television network CBS on March 7.

The YouGov poll found older people were less likely to approve of the televised interview.

Meanwhile, Labour voters were more likely than Conservatives supporters to back the couple’s decision to speak out.

A huge 72 percent of Tory voters said it was inappropriate, compared to just 26 percent of Labour supporters.

The interview will air just weeks before the one-year anniversary of Megxit.

READ MORE: Meghan & Harry ‘lost in each other’ – photographer gushes over couple

Meghan and Harry – who are expecting their second child – officially ended royal duties on March 31.

The former actress, 39, and the Queen’s grandson, 36, are now living in California with their young son Archie.

It is not known if Harry and Meghan informed the royal household in the UK about their plans to be interviewed, but as non-working members of the monarchy they do not have to give notice of their media commitments.

Public relations and crisis consultant Mark Borkowski described the interview as a “significant moment”, saying it would “supercharge” the couple’s brand.

He added: “It will be about the difficulties of being Harry and Meghan.

“They’ll be talking about the stress and the mental health issues, and talking about how low they were at the time of the miscarriage, how they’re coping with a new life in America – what they hope to do.

“I think there might be some guarded remarks about the brother-in-law and the sister-in-law, but that’s about it.

“They will lose ground and lose valuable time if they spend too much time digging up many wounds from the past – this is about them and their brand.”