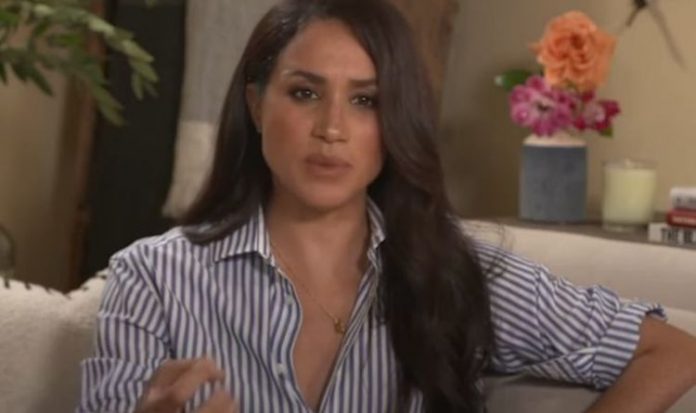 Meghan Markle has left royal commentators questioning how genuine the items in backgrounds are for the Duchess during her video appearances. Following an interview that allowed viewers a closer look into the Duchess’ home, Royally Obsessed podcast hosts suggested she may be seeking attention. Hosts Rachel Bowie and Roberta Fiorito argued that following a video message to a contestant on America’s Got Talent, Meghan is well aware of the attention she draws.

The pair added, the Duchess may also be carefully selecting her book collection, for her background in interviews and videos, due to her desire to garner more attention.

Ms Fiorito said: “I was taken aback by how much of a view inside Meghan and Harry’s home we got.

“A lot of the time their interviews have been outside and it has been hard to get any details about the home.

“It is fulfilling my most voyeuristic needs and desires to see inside their home.”

Ms Bowie agreed and insisted Duke and Duchess are aware of the attention they bring.

She said: “Meghan and Harry know that, I am sure those coffee table books are completely selected specifically for attention.

“It is interesting they had The Black Godfather which is about the Clarance Avant story.

“Another book was the National Geographic Image Collection and a Photographer’s life by Annie Leibovitz to name a few.

“They had the Diptyque candles which was the brand they used as diffusers at their wedding and reception.”

The pair closed by praising Meghan for her appearance and how good the lighting was during the interview.

While the pair also agreed Meghan may be innocently seeking attention, other royal commentators have warned against making mistakes following her decision to step down as a working member of the Royal Family with Prince Harry.

While speaking to Express.co.uk, royal commentator Richard Fitzwilliams noted Meghan and Harry making dramatic moves was unwise and could cause ill-feeling from either the Royal Family or the public.

Mr Fitzwilliams also considered the possibility that the Duke and Duchess experienced controversy because, while working as senior royals, they did not listen to advisers.

Looking forward, the royal expert cautioned the couple of more dramatic changes as they are still tied to the Royal Family.

Mr Williams said: “Mistakes have been made in the past, I think we saw how Meghan and Harry’s relationship with the press cooled when they tried to dictate what was private and what was not.

“Since they were receiving tax-payer money this was not well handled.

“When they stepped down so dramatically in January it deeply upset the Royal Family.

“This is the sort of dramatic sudden decision that can be very unwise and cause a lot of ill-feeling.”