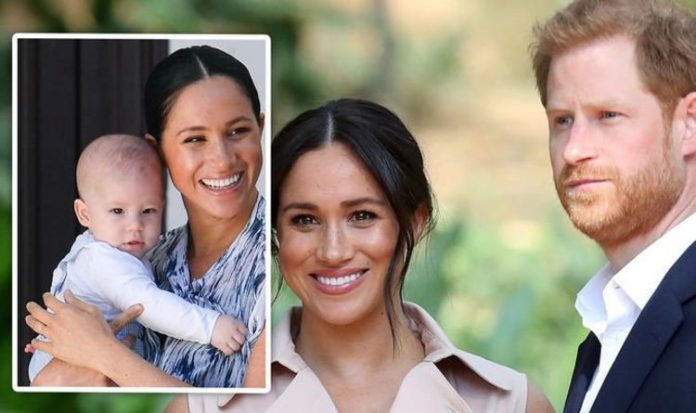 Meghan has claimed the photographs taken in January in Canada by picture agency Splash represent a misuse of her son’s private information and are in breach of the Data Protection Act. Splash’s solicitors have reportedly suggested Meghan “knew everything that was going on” and “she carried on walking when she knew she was being photographed”.

The case has been brought to the High Court in London in the names of Master Archie Harrison Mountbatten-Windsor and the Duchess of Sussex.

Harry and Meghan are described as their son’s “litigation friends”, which means they are appointed to make decisions about the court case for their child.

The claim is being pursued against the US branch of Splash and a London company of the same name that acts as a representative.

During a remote hearing on Wednesday, the representative for the Sussexes, barrister Jonathan Barnes, said Meghan and Archie had been “papped”.

He told the court: “In a nutshell, as a claimant lawyer, I would describe what happened to the claimants as being they were ‘papped’.

“This was without their acquiescence or consent and it is accepted that it was by an employee of the [US agency], Steve Dennett.”

Speaking about the nature of Meghan and Archie’s outing, Mr Barnes added the photos had been snapped during “a private recreational outing on Vancouver Island”.

The barrister also claimed that the day before these pictures were taken, the photographer was “at the private home of the claimants” and said he was “casing their home, testing his light meter and taking photos through the security fence, so he was not at the park by accident”.

Mr Barnes added the representatives of Splash had suggested in correspondence that “the first claimant knew everything that was going on and was a volunteer in the sense that she carried on walking when she knew she was being photographed”.

The Sussexes’ barrister continued: “What happened immediately after the photographs were taken is that … they were immediately offered for worldwide syndication to the media and, what’s more, they were then snapped up, in particular by Associated Newspapers and News Group.”

Meghan Markle and Prince Harry introducing Archie to the world in May last year (Image: GETTY)

The photographs had been taken in Canada by an American photographer, the barrister said.

However, the “trading of the ill-gotten gains” occurred in London, he added, explaining why the UK High Court had been deemed a suitable place for the claim.

Mr Barnes added: “That conduct, which is essentially the trading of the private information or the personal data, all took place here.”

The picture agency was not represented at the hearing but has said it “intends to defend itself vigorously”.

Meghan Markle and Prince Harry married in May 2018 (Image: EXPRESS)

The hearing ended with Master Victoria McCloud giving the claimants permission to serve their case against the US arm of Splash.

The Duchess of Sussex and her son were photographed while walking their dogs in Canada, a few days after Meghan and Harry had announced their intention to step back as senior royals.

In the pictures, Meghan can be seen smiling broadly while holding her two dogs on a leash.

Archie, carried in a sling, can only be seen from behind.

On the background, security officers can be seen walking at a distance behind the Duchess and Archie.

At the time these pictures were taken, the group was strolling through Horth Hill Regional Park on Vancouver Island, where the Sussexes temporarily lived between mid-November and March.

This isn’t the first time the Sussexes cross swords with Splash.

In May 2018, Prince Harry accepted damages and an apology from Splash after the agency took photographs from a helicopter of his home in Cotswolds.