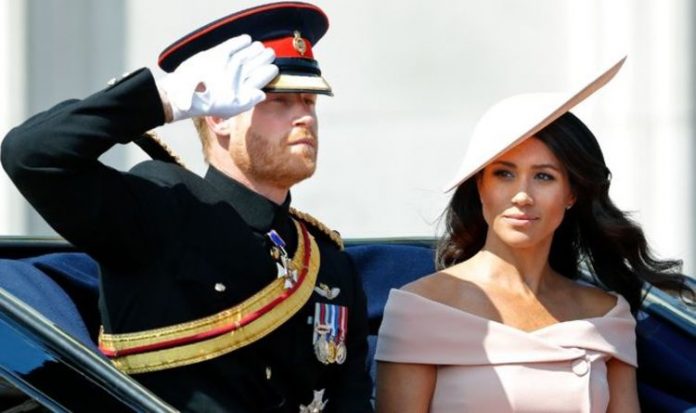 The Duke and Duchess of Sussex are living in California with their young son after quitting royal duties last March. Harry plans to return to Britain in the summer for a number of key events including the Queen’s 95th birthday, Prince Philip’s 100th and the unveiling of a statue he and Prince William commissioned for their late mother Princess Diana.

But the Queen’s grandson will travel on his own with Meghan and Archie staying in America, royal author Omid Scobie claimed.

Mr Scobie, co-author of Finding Freedom, insisted the ex-Suits star’s absence would not be a “snub” to the Royal Family but was due to coronavirus restrictions.

He told OK! magazine: “Neither Meghan nor Harry have been vaccinated and travel plans are still very much up in the air.

“Meghan wouldn’t want to be away from Archie and it would be very tricky to factor a small child into their travels with all the restrictions that could potentially be in place.

He said: “No matter what has happened, the Queen will always remain close to Harry and Meghan.

“She has a very special relationship with Archie and due to them all living in Windsor, was one of the royals to spend the most time with him as a baby.

“Archie loves being on Zoom calls with the family and the Queen has been enjoying those throughout lockdown.

“I’m sure Meghan will send the Queen some gorgeous flowers for her birthday and also get Archie to help her with the card.

“Meghan and Harry feel very sad about the time that the Queen, Philip and Prince Charles have spent without seeing Archie due to the pandemic.”

The Queen turns 95 in April and this will be officially celebrated with Trooping the Colour in June.

The display of pomp and pageantry was scaled down last year due to the pandemic.

The event usually sees members of the Royal Family gather on the balcony of Buckingham Palace.

The Duke of Edinburgh also celebrates his milestone 100th birthday in June.

And a statue Harry and William commissioned to honour Diana is set to be revealed on July 1.

The memorial by Ian Rank-Broadley, which was delayed because of the coronavirus outbreak, is due to be unveiled in the Sunken Garden of Kensington Palace on what would have been their mother’s 60th birthday.

It had been hoped the project would bring the brothers closer together.

The Sussexes are understood to have left the royals blindsided when they announced plans to step back just over a year ago.

Since quitting the monarchy, they have bought an £11 million mansion in California and signed lucrative deals with Netflix and Spotify.