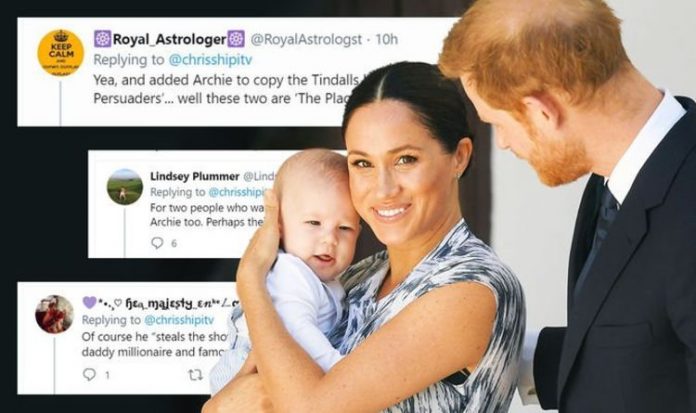 Meghan Markle, 39, and Prince Harry’s, 36, wish to leave royal life behind was in part due to their desire to give their son Archie Harrison a “more peaceful life”. Since Archie’s birth on May 6, 2019, Meghan and Harry have gone to great lengths to protect their son’s privacy and opted for an illustration as opposed to a photograph of themselves with Archie for this year’s Sussex family Christmas card.

Earlier this month it was revealed the couple had signed a lucrative deal with Spotify to produce a podcast for the streaming platform.

The first episode of Archewell, which is hosted by Meghan and Harry was released on Spotify on Tuesday afternoon and featured their son Archie speaking at the end.

Archie wished listeners a “Happy New Year” as the episode came to a close and some fans have struck out at the protective parents for including their son in the recording.

Reacting to the new episode on Twitter, one enraged fan wrote: “For two people who wanted privacy, I find it strange if they are now parading Archie too.

“Perhaps their idea of privacy is different from mine!”

A description of the episode on Spotify reads: “As we come to the end of the year, Prince Harry, The Duke of Sussex, and Meghan, The Duchess of Sussex, present a special collection of inspiration, reflection, and perspective from guests around the world, including Stacey Abrams, Christina Adane, José Andrés, Brené Brown, Rachel Cargle, Deepak Chopra, James Corden, Matt Haig, Sir Elton John, Hussain Manawer, Naomi Osaka, Tyler Perry, and George the Poet (plus a surprise or two).

“Curated throughout the month of December, join them as they reflect on the year, speak openly about the power of compassion, and toast to a hopeful 2021.”

Archie has not been back to the UK since November 2019 when he left for Canada with his parents.

Archie remained behind in North America in the care of friends and nannies as Meghan and Harry returned to the UK to wrap up royal duties last year.

The Sussexes could return to Britain next spring to celebrate Prince Philip’s 100th birthday on June 10.

They have kept hold of their Windsor home Frogmore Cottage and recently paid back the £2.4 million British taxpayers’ money spent on renovating it.