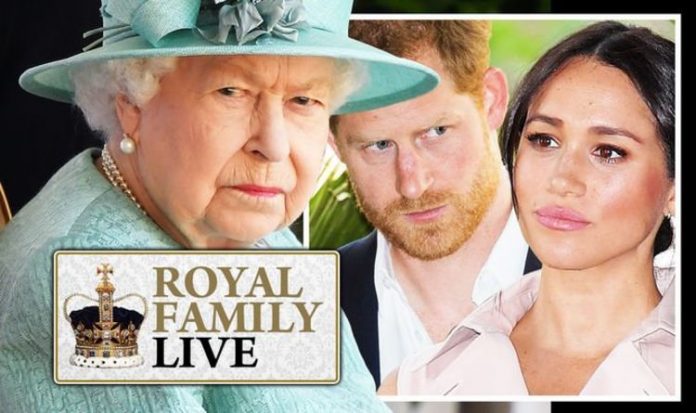 Royal fans were quick to jump on social media to give their take on the show which saw Archie speak in public for the first time. The Duke and Duchess of Sussex’s son wished listeners a happy new year as his mother and father ended the show with the popular phrase “love always wins”.

While some questioned the couple’s motive for bringing their tot on the podcast, having been fiercely protective of his privacy in the past, others called for Harry and Meghan to be stripped of their royal titles.

One person said: “Take away their titles and ranking, then let’s see just how far they can go.”

A second wrote: “They should have their HRH titles removed asap!

“It seems like #Ranking benefits Meghan Markle and Prince Harry.”

And yet a third said: “Please strip them of titles and remove from line of succession.”

On the first episode of their Archewell Audio podcast, Meghan quoted Martin Luther King when she said: “Darkness cannot drive out darkness, only light can do that”.

But not all fans were impressed by the “dull” tone struck by the pair on the show.

One person said: “Without the royal kudos, are Harry and Megan just yet another celeb couple, yawn?”

And questioned if the toddler appearing on the show was really “the baby that they so wanted to shield from the British public”.

Harry and Meghan are due to have their Megzit deal with the Queen reviewed in March.

The Duke may choose to return to the UK to seek a 12-month extension, reports have claimed, in a bid to prolong the couple’s ties with the Firm.

If the monarch grants his request, it would leave the door open until 2022 for a possible return.

Prince Harry has started speaking in an “Estuary English” accent, according to observers – a style of speaking associated with Ricky Gervais, Russell Brand and Jonathan Ross.

The Duke and Duchess of Sussex’s new podcast has drawn the attention of ears across the country and beyond, with many noticing the new twang.

Harry, 36, and Meghan, 39, released the first episode of the hotly anticipated Archewell Audio on Tuesday.

BBC presenter Sangita Myska picked up on the change in Harry’s voice, commenting on Twitter: “He’s gone a little Estuary English, no?”

She said Harry’s accent, at times, “would probably sound right in the Queen Vic in Eastenders”.