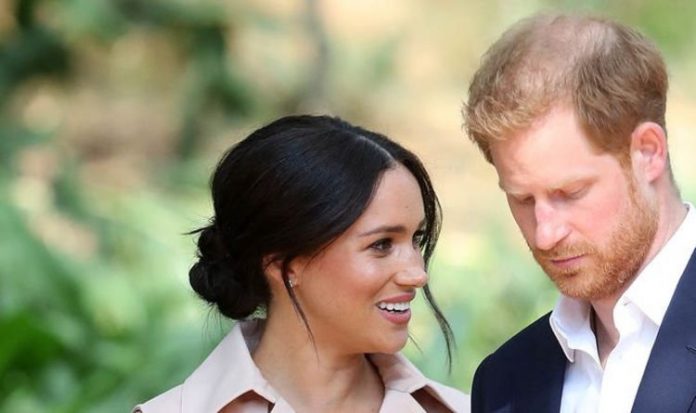 The Queen’s former press secretary Dickie Arbiter lashed out against Meghan and Harry, dismissing claims they did not back or contributed to the newly-released book Finding Freedom despite a statement from the couple saying otherwise. Mr Arbiter revealed on Twitter he has read the new, unauthorised, biography by Omid Scobie and Carolyn Durand.

The amount of details reported in this book and how it breaches their privacy has led the former courtier to believe the Duke and Duchess of Sussex must have been involved with the book’s authors.

Mr Arbiter wrote: “I said when @thetimes serialised #FindingFreedom that #H&Ms fingerprints were all over the book.

“Having read it at half price from @Amazon I’ve not changed my mind.

“Too much minutiae, too much poor us and too much invasion of privacy.”

Mr Arbiter noted how defending their privacy has been one of the key worries of Meghan and Harry over the past three years and outlined the length at which they have gone to do so.

However, he continued, Meghan and Harry’s silence following the publication of Finding Freedom seems to suggest they don’t have a problem with how much of their private life has been exposed by Mr Scobie and Ms Durand.

He continued: “They turned their backs on the #RoyalFamily and the #UK because of what they described as a vicious press and an invasion of their privacy.

“#FindingFreedom has done quite the opposite and laid bare their privacy.

“Are #H&M crying foul – the silence from #California is deafening.”

Another royal expert – and daughter of the former press secretary to the Queen – Victoria Arbiter appeared to agree with her father.

While not touching upon whether Meghan and Harry did collaborate first-hand to the biography, Ms Arbiter said the fact that the authors have been briefed by aides and close friends of Meghan and Harry suggested the Sussexes were aware and happy with the book.

She wrote on Twitter: “Omid confirmed this morning, ‘But of course we also had a lens to the couple through their friends and their circle of aides’.

“No friend would speak without permission as it would be the ultimate act of betrayal.

“If an aide broke their trust they’d promptly be fired.

“With such personal details revealed it is far better to have had the couple’s permission than to have sold them out.

“Common sense says no close friend would willing speak to a journalist without an OK from the subject in question.”

He said: “I know there are a lot of rumours and talk about the couple cooperating with the book and us having secret interviews with them, and this was not the case.

However, a note at the end of the book clearly says the Duke and Duchess of Sussex had been contacted during the production of the book “when appropriate”.

It read: “We have spoken with close friends of Harry and Meghan, royal aides and palace staff (past and present), the charities and organisations they have built long-lasting relationships with and, when appropriate, the couple themselves.”

After this footnote was read by many as an evidence Meghan and Harry did cooperate with the book, Mr Scobie took to Twitter saying: “Let’s make one thing clear: There’s a huge difference between exchanging a few words with a member of the Royal Family on an official engagement or tour to actually interviewing them.

“The amount of nonsense doing the rounds right now is unreal.”