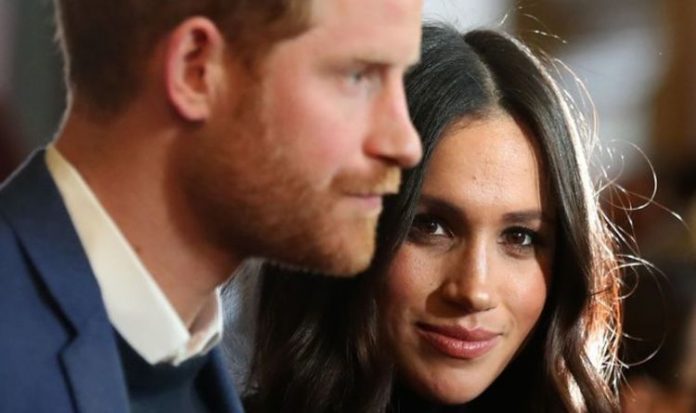 During the Royally Obsessed podcast, Rachel Bowie and Roberta Fiorito discussed claims in a new tell-all biography on Prince Harry and Meghan Markle, titled Finding Freedom. The commentators referred to the fact Russian hackers stole personal photos of the Duke and Duchess of Sussex. Ms Bowie also stated that some of the couple’s unseen wedding photos were leaked on Tumblr.

Ms Fiorito replied: “Yeah, they lifted them right off their wedding photographer’s computer.

“They hacked right into, this is a problem!

“It is insane, they were very upset about it.”

Ms Bowie said: “They were posted on Tumblr and people thought they were photoshopped.

“But I guess they were real.”

Ms Fiorito responded: “There were steamy photos of them in Jamaica that have never been revealed either that were taken at a friend’s wedding in 2017, Harry’s friend.

“The fact that they had that level of intrusiveness.

Ms Bowie said: “They were such a whirlwind romance.

“The book talks about Harry being swept off his feet, it was so fast.

“I can’t believe that the Botswana trip was one month in, I guess we kind of already knew the timeline around that.

“It is just crazy that they met in July and went in August, so really only their third date was to Botswana.”

Ms Fiorito replied: “I know he was so smitten, they were both caught by surprised at how quickly they fell in love according to the book.”