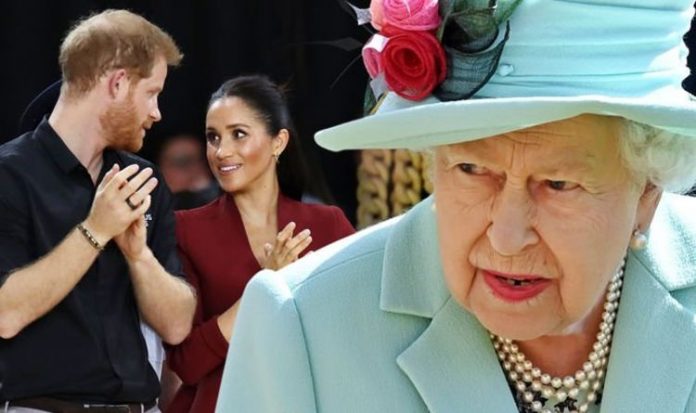 Meghan Markle, 39, and Prince Harry, 36, quit the monarchy last March in a major blow for the Royal Family. But while they are no longer bound by protocol, a royal commentator has branded the Duchess’s decision to agree to a sitdown interview with chatshow host Oprah Winfrey without consulting Queen Elizabeth II “disrespectful.”

Oprah is a friend and neighbour of the Sussexes who have been based in the USA since last year.

According to the CBS network behind the interview, Meghan will be asked about “stepping into life as a royal, marriage, motherhood” and “how she is handling life under intense public pressure”.

The sit down will be the first time the Sussexes have agreed to publically answer questions about their royal departure.

READ  Did you notice a change in nan or grandad's hearing this Christmas? This could be why | UK | News (Reports)

According to one royal commentator, the Oprah Winfrey Special could make uncomfortable viewing for the Palace as they will be “unable to counter whatever is said.”

Mr Fitzwilliams also claimed the interview is a savvy PR move from Meghan and Harry as it will help to boost their brand.

He added: “This interview which follows Harry and Meghan’s deals with Netflix and Spotify, shows the power of celebrity.

“Oprah is a friend and just as they followed the Obamas and Clintons in joining the Harry Walker Agency for public speaking, so they will enhance the value of their brand in doing this.

“It comes in a week where Meghan has won an important court action with Associated Newspapers and the couple also announced on Valentine’s Day that she is pregnant with their second child so this interview is an extraordinary development.”

Highlighting the questions raised by Meghan and Harry’s latest move, Mr Fitzwilliams said: “Will Harry keep his military titles and Meghan her patronages? What will they actually reveal of royal life?

“We know the press will be excoriated, though, for a couple who care so much about their privacy, they also seek huge coverage on their own terms, it is a symbiotic relationship.”

The commentator also suggested Palace courtiers face being attacked if the Sussexes share about royal life.

Mr Fitzwilliams added: “The courtiers are another obvious target. Finding Freedom, a trashy biography with which their inner circle collaborated, praised the Queen and the Prince of Wales but not the Cambridges.

“On July 1 Harry, who appears later in the interview with Oprah, will be with his brother to unveil a statue to Diana on what would have been her 60th birthday and the world will be watching that too.”