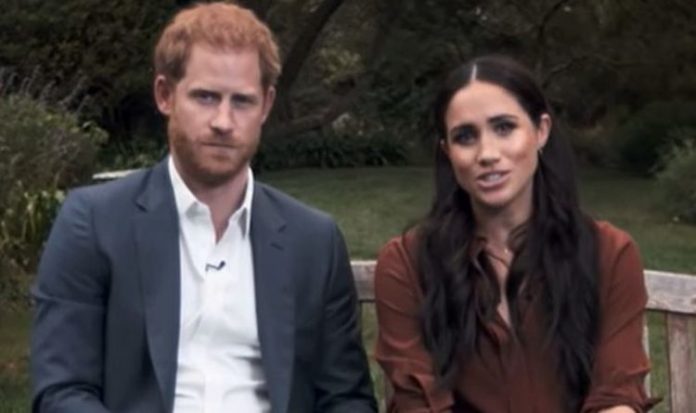 Meghan Markle and Prince Harry have been told to “fully renounce” their royal titles due to their new podcast. The Duke and Duchess of Sussex announced at the start of the month that they had secured a multi-year deal with streaming platform, Spotify. Calvin Robinson, a senior fellow at think tank Policy Exchange, argued on Sky News that the royal couple must now be considered “political”.

“As well as mental health and commentary on topics of current and general interest.

“To me, it tells me that we’ve got two of the most privileged individuals in the world looking to lecture the rest of us on how we should be living our lives.”

“At this point we can no longer say that these two people are no longer political.

“They need to full renounce their royal titles.”

Host Stephen Dixon added he could imagine the podcast “rubbing a few people up the wrong way”.

A one-minute audio trailer has already been dropped, introducing the concept of the shows.

For the Holiday Special, the Sussexes explain that they will be talking to “some amazing people”, who are going to share their memories which have shaped this past year.

In a statement following the official announcement, the couple said: “What we love about podcasting is that it reminds all of us to take a moment and to really listen, to connect to one another without distraction.

“With the challenges of 2020, there has never been a more important time to do so.