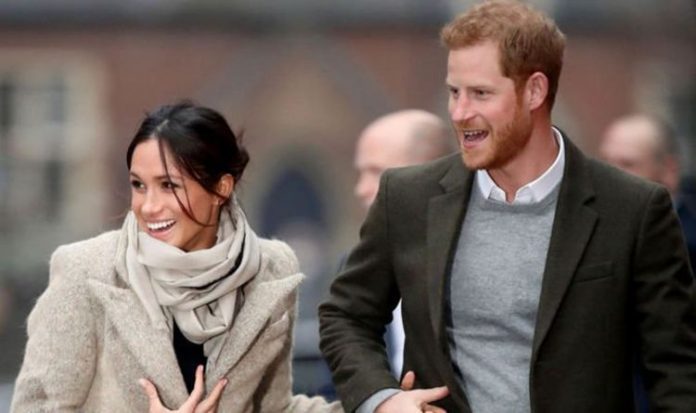 Meghan and Prince Harry stepped down as senior royals in late March, but are still following the royal custom of replying to fans’ best wishes with a card. Royal fan account Gert’s Royal Replies revealed on Twitter they have received a thank you card from the Duke and Duchess of Sussex in response to their Christmas wishes.

The royal fan explained the card arrived yesterday and, in line with other cards issued by Royal Family members, it included a photograph and a message.

The picture chosen for Meghan and Harry’s card was taken in October 2018, during their whirlwind tour Down Under.

In the snap, Meghan smiles while holding an umbrella over her and Prince Harry’s head as a protection from the pouring rain.

In the picture, the Duke gives a speech to the local.

At the time, Meghan was pregnant with Archie Harrison – as announced by Buckingham Palace on September 15, 2018.

This thank you card presents a more personal message from the Sussexes than the one they shared after Christmas 2019, which had been written by an aide on their behalf.

It read: “Thank you for your thoughtful message.

“We appreciate your kind words and the time you have taken to write to us on this special occasion.

“Sending you our warmest wishes. The Duke and Duchess of Sussex”.

Much like last year, Meghan and Harry did not include in their thank you card any reference to their son Archie Harrison.

The envelope in which the card was sent presents Meghan and Harry’s monogram – an H and M intertwined below the Prince of Wales’ Coronet.

The card, the royal fan said, features the postmark from the Court Post Office at Buckingham Palace and has been sent by the correspondence section at Clarence House.

Express.co.uk has contacted Clarence House for comment over its handling of Meghan and Harry’s correspondence following Megxit.

Members of royal families across Europe traditionally send out thank you notes to the hundreds of royal fans who reach out to them on key anniversaries or days with letters.

Some royals, including Camilla, Duchess of Cornwall, often include a handwritten signature to their cards.

Meghan and Prince Harry have issued their Christmas card last year through one of the Duchess’ patronages, animal rescue charity Mayhew.

The card was an artistic rendition of a picture taken by the Duchess’ mother Doria Ragland.

In it, Meghan and Harry can be seen in their garden with their son Archie – who seems to have inherited the red hair gene from his dad.

Archie also featured in the Christmas card released only in digital form by the Sussexes in 2019.

In the snap, the baby can be seen crawling towards the camera while Meghan and Harry smile under the Christmas tree.

In 2018, Meghan and Harry released a Christmas card with a black-and-white picture taken during their wedding day.