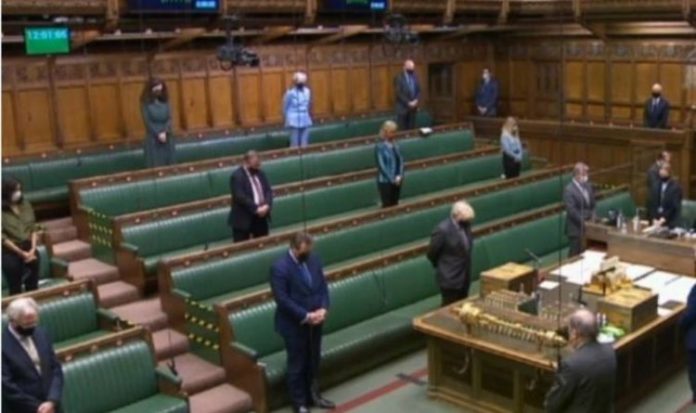 Captain Tom Moore was known for his inspirational fundraising for the NHS which captured British hearts across the country. Raising over £33million for healthcare charities, the brave soldier tragically died on Tuesday after contracting Covid. Tributes poured in for the hero as the Queen recognised him for his “inspiration he provided for the whole nation and others across the world” and a minute’s silence was observed in the House of Commons.

Speaker Lindsay Hoyle began proceedings by speaking of the “sadness” felt by the House and sent Captain Tom’s friends and family condolences.

The Prime Minister took part in the silence and said in a statement presented to the house: “Captain Sir Tom Moore or Captain Tom as we came to know him dedicated his life to serving his country and others.

“His was a long life lived well, whether during his time defending our nation as an army officer and last year bringing the country together through his incredible fundraising drive for the NHS that gave millions the chance to thank the extraordinary men and women of our NHS who protected us during this pandemic.

“As captain tom reminded us, tomorrow will be a good day.”

The Prime Minister urged everyone to join in with a national clap for Captain Tom and for health workers tonight at 6pm.

When he finished his challenge, he raised a total of £12million which continued to rise over the following months.

Tributes for Captain Tom flooded in as the UK is saddened over the loss.

The Prime Minister said in a statement: “Captain Sir Tom Moore was a hero in the truest sense of the word.

“It is quite astonishing that at the age of 100 he raised more than £32 million for the NHS, and so gave countless others their own chance to thank the extraordinary men and women who have protected us through the pandemic.”