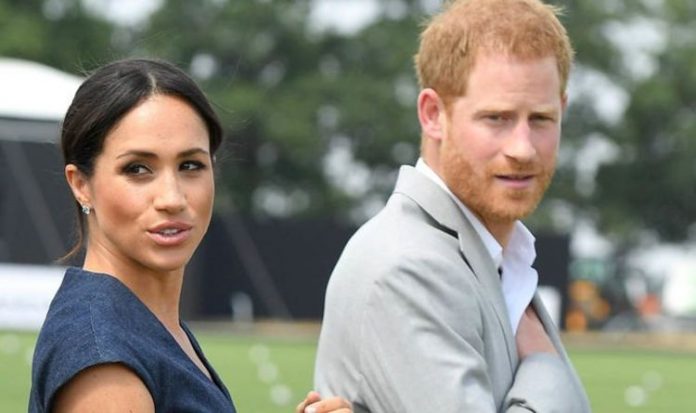 Meghan and Harry’s newly-released biography Finding Freedom has been savaged by royal commentator Richard Fitzwilliams. The expert said the book, by journalists Omid Scobie and Carolyn Durand, exposes what Meghan and Harry have been perceiving as digs against them.

However, some of the examples provided are simply “trivial” and won’t help the Duke and Duchess of Sussex gain much sympathy, Mr Fitzwilliams claimed.

He told Express.co.uk: “William’s perceived ‘snobbery’ in asking if Harry was sure about Meghan for example, is trivial.

“Whether or not he referred to her as ‘that girl’ actually made headlines in the Sunday Times which is stupefyingly silly.”

Mr Fitzwilliams referred to a chapter of the book in which the authors claim the feud between William and Harry started because the Duke of Sussex was hurt by his brother’s concerns for the speed at which the relationship with Meghan was moving.

The royal commentator wrote a brief, scathing comment on Twitter after having read the book in full, confirming he believes some of the events reported as hurtful for the Sussexes are “trivial”.

Describing the unauthorised biography as “hagiographic”, Mr Fitzwilliams wrote: “What an overhyped and trivial journal.

“It’s full of intimate details, if Harry and Meghan hadn’t wanted this, of course they could have stopped it.

READ MORE: Prince Harry opens up on need to have ‘handful of people to reach out’

“Where are sources and index?

“It’s hagiographic sometimes fawning about them, doesn’t like the Cambridges but doesn’t totally burn bridges.”

The book describes the blossoming romance between Meghan and Harry, their wedding, the issues they encountered with aides and members of the Royal Family, their work and their fallout with the institution of monarchy.

Mr Scobie and Ms Durand said to have spoken to dozens of sources, including palace aides, former courtiers and several friends and members of the Sussexes’ close circle – and denied Meghan and Harry ever collaborated on the biography.

The level of details with which some of the events are described in the book as well as Meghan’s feelings and thought have brought a few royal commentators to believe the Duke and Duchess of Sussex may have somehow collaborated with the book.

Biographer Penny Junor told the MailOnline: “The authors certainly have some extraordinarily personal and private details about Harry and Meghan, but the couple have said they didn’t speak to them directly and we have to take their word for it.

“What seems absolutely clear, however, is that they colluded.

“If not, they would have kicked up a huge fuss about this book.

“I suspect they wanted to get their story and their feelings about how they were treated out into the public arena and have done so via friends who sound as though they were very well and carefully briefed.”

The book’s authors describe private episodes as well as inner thoughts and feelings of the Duke and Duchess of Sussex.

Tiny body gestures carried out during their private and intimate second date are described in details by Mr Scobie and Ms Durand.

The book read: “‘Harry and Meghan ‘chatted a lot’ that evening which ended chastely with Harry returning to the palace.

“Still, their chemistry had been electric throughout the meal as they both flirted.

“A touch of an arm here, direct eye contact there.”

The book also unveils Harry and Meghan’s breakfast and shopping routine in the early days of their marriage.

It read: “Sipping coffee or tea together in the kitchen every morning became a ritual.

“Then they took turns making breakfast from the organic seasonal produce they ordered from nearby Daylesford Farm or the groceries they had delivered by Waitrose.”