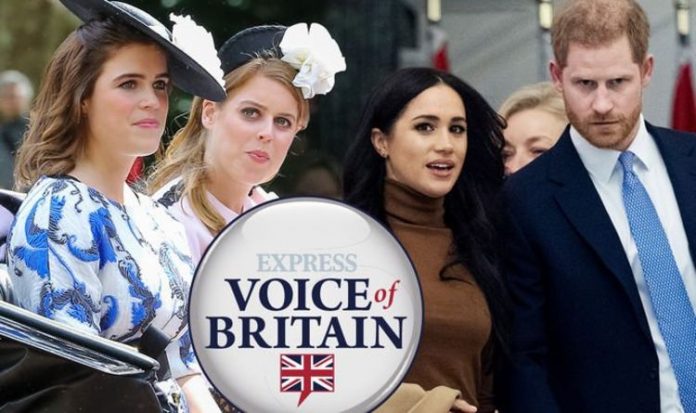 Meghan and Harry sensationally quit their senior roles within the Royal Family in March and have been living in California. The Duke and Duchess of Sussex have not looked back and pressed ahead with private projects including a deal worth an estimated £100million with US streaming giant Netflix.

The royal couple are set to remain in the US for the foreseeable future with plans in place for Eugenie and her husband Jack Brooksbank to move into their marital home Frogmore Cottage.

The absence of Meghan and Harry has left a hole in the Royal Family and biographer Robert Lacey believes Eugenie and Beatrice will likely be “brought forward” into the fold.

A subsequent poll of more almost 3,000 Express.co.uk readers has found three quarters of people believe the Duke and Duchess of Sussex should be replaced.

The survey conducted on Tuesday December 8 from 9.06am to 8.30pm asked 2,795 readers should Meghan Markle and Harry be replaced on royal frontline by Eugenie or Beatrice?

The vast majority of readers, 77 percent (2,115), thought they should be replaced and voted “yes”.

The poll sparked much debate amongst Express.co.uk readers, one reader said: “Better still, put them both to work.”

A second user wanted to go further, they said: “And Harry removed from the line of succession!”

Neither Beatrice nor Eugenie are working members of the Royal Family and have forged their own careers.

Beatrice has achieved a bachelor’s degree in History from the University of London, and works in the finance and consulting industries.

Meanwhile, Eugenie who is currently pregnant with her first child, has a degree in art history and English literature.

Since 2015 she has worked as a director for art gallery Hauser & Wirth based in London.

Royal biographer Robert Lacey believes the pair could have a change of career in the near future if they wanted to.

“I’m sure they will step forward and be greatly welcomed. It’s what the family needs as it’s another 15 years before Prince George’s generation steps up.