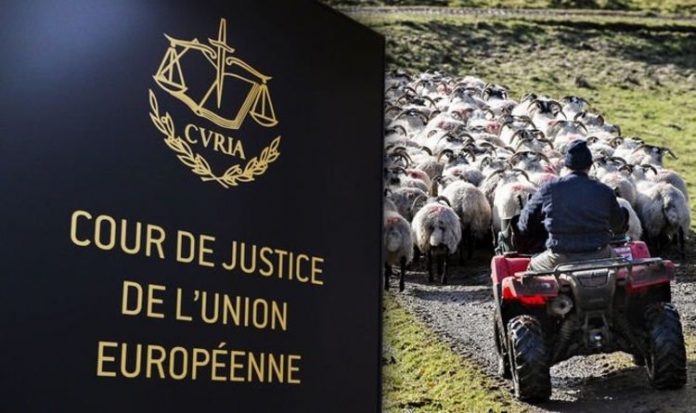 The UK must secure third country listing with the EU before the transition period is over, the National Farmers Union (NFU) has warned. Vice President Tom Bradshaw spoke to Express.co.uk about why being granted this licence was “absolutely critical” for post-Brexit Britain. The EU’s Chief Negotiator Michel Barnier previously said that “more clarity” was needed about Britain’s own hygiene and disease control procedures before an “assessment” could take place.

Mr Bradshaw told Express.co.uk: “The overwhelming thing that’s facing the industry at the moment is just huge uncertainty. A lot of our exports and imports of food will go through the ports.

“The pressure on the ports is going to be huge, there’s a complete change in the paperwork required, which businesses have got to get ready for.

“We still don’t have third country listing at the moment with the EU, which we need to export all product of animal origin, like beef, lamb, dairy and poultry.

“Obviously the lamb market is absolutely critical for our country into the EU. 70 percent of our lamb exports go over to the EU so there will be a very significant impact on the lamb market overnight if we don’t have access to the EU market. It’s just very difficult to plan for what that’s going to look like.”

Without the licence, UK goods exports would be blocked, and so threaten much of the country’s industry.

A Government spokesman said: “The right to export is the absolute basis for a relationship between two countries that trade agricultural goods.

“It is a licence to export and entirely separate from the issue of food standards. It would be very unusual for the EU to go down this route and deny the UK listing.”

Mr Bradshaw also mentioned other concerns that were plaguing the thoughts of NFU members.

The NFU Vice President added: “From January 1, freedom of movement ends, and yet we don’t know how we’re going to be able to get our seasonal workforce into the country.

“We haven’t been able to get any occupations onto the Shortage Occupation List.

“It’s a particularly challenging picture just because of all that uncertainty that we’re facing.

“So that’s creating an environment of a lack of confidence where people don’t know how to invest in their businesses, where to invest and what lies in the future.

“So I think at the moment we’re just desperately seeking answers from the Government. I think businesses across all sectors are in a similar position.”